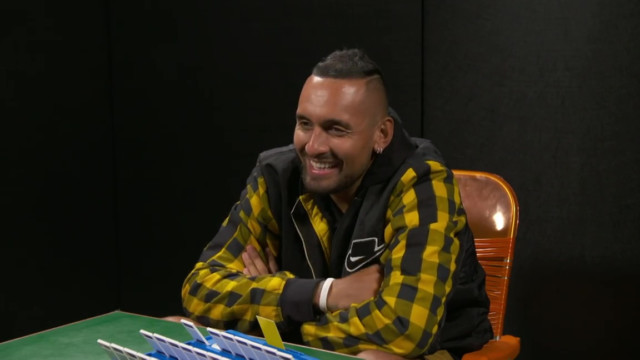 The 25-year-old Australian sat down for a game of Guess Who? with comedian Andy Lee.

Among the candidates involved were Donald Trump, The Queen, Britney Spears and Bill Gates.

Kyrgios had Trump in his hand, so Lee asked him ‘if they started an OnlyFans site, would they get a lot of subscribers?’

The tennis ace responded that they ‘would get a lot of suscribers, but I personally wouldn’t subscribe’.

That prompted Lee to eliminate Borat, The Queen and Gates.

Lee then asked Kyrgios: “Would you get a few subscribers?”

The Aussie replied: “Ah, I think I would”, before the pair burst out into laughter.

And if Kyrgios did decide to join OnlyFans, he could turn to fellow tennis star Bernard Tomic for advice.

The German-born Australian regularly appears on his girlfriend Vanessa Sierra’s clips on the X-rated platform.

Kyrgios sat down for a game of Guess Who? with comedian Andy Lee

Kyrgios, meanwhile is currently competing in the Australian Open where he faces US Open champ Dominic Thiem on the fifth day.

Kyrgios said the vocal crowd at John Cain Arena helped get him through.

Organisers have scheduled him for the first night match at the same venue against Thiem, the runner-up here last year. Kyrgios is currently competing in the Australian Open

Did you miss our previous article…
https://www.hellofaread.com/royal/britains-bold-strategy-to-delay-covid-jab-doses-backed-by-world-health-organisation/

Kate Middleton ‘overwhelmed by response’ to photography competition as she reveals top 100 ...