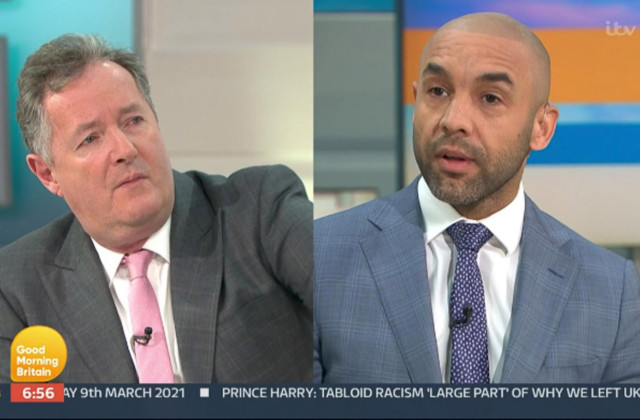 PIERS Morgan has insisted his storming-off Good Morning Britain today wasn’t a stunt – opening up on the “family tensions” on the daytime hit.

The 55-year-old star stunned viewers this morning when he marched off the set during a debate with weatherman Alex Beresford.

Accused of doing it for ratings by a follower on Twitter, Piers insisted: “No, it was real.

“But the debate that followed was very strong, so worth a bit of @GMB family tension.”

And when ITV’s Chris Ship suggested he could dish out criticism but not take it, he replied: “Sure. I just prefer not to sit there listening to colleagues call me diabolical.”

Piers stormed off GMB today after he was slammed by co-star Alex Beresford following their Meghan Markle clash. Piers says he walked after weatherman Alex called him ‘diabolical’

But Piers refused to listen, eventually snapping and saying: “I’m not having this” as he left the set.

Alex had told him: “I understand that you don’t like Meghan Markle, you’ve made it so clear a number of times on this programme.

“I understand you’ve got a personal relationship with Meghan Markle, or had one and she cut you off… She’s entitled to cut you off if she wants to.

“Has she said anything about you since she cut you off? I don’t think she has, but yet you continue to trash her.” Piers was hosting the show today alongside co-star Susanna Reid Piers and Meghan famously went for a drink in June 2016, around the time that she started dating Prince Harry, but he claims he never heard from her again.

Alex’s remark clearly hit a nerve, with Piers dramatically standing up and saying: “Okay, I’m done with this.”

Making his way to the studio exit, he continued: “Sorry, see you later, I can’t do this.”

Exasperated Alex responded: “Absolutely diabolical behaviour, I’m sorry but Piers spouts off on a regular basis and we all have to sit here and listen.”

Elton John, 75, is in a wheelchair ahead of Queen’s Jubilee concert as Rod...

Who is on BBCs Question Time tonight? Full line-up of guests confirmed

God of War: Ragnarök preview – Kratos is not just stronger but smarter

Inside Meghan Markle’s homes from before she was Royal & how they’re vastly different...