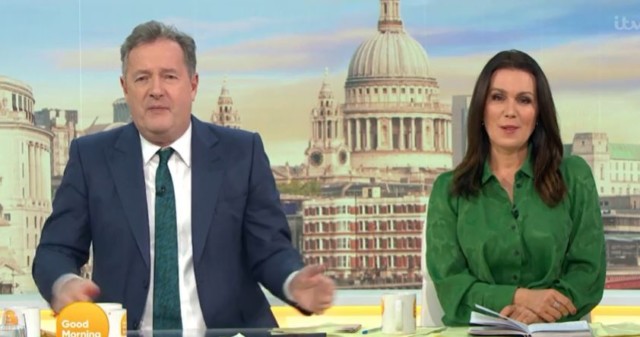 PIERS Morgan has been slammed by a mental health charity for not believing Meghan Markle had ‘suicidal thoughts’.

The Good Morning Britain host spent most of Monday sharing his no holds barred opinion of Meghan and Prince Harry’s eye-opening interview with Oprah Winfrey.

The tell-all with the American chat show queen saw the former actress reveal she’d struggled with her mental health and at one point felt suicidal.

The Duchess of Sussex, 39, said she begged for help but was told she would not be able to seek help as it “wouldn’t be good for the institution.”

Breaking down in tears during the interview which aired on CBS on Sunday night and ITV the following evening, Meghan said: “I just didn’t see a solution.

“I didn’t want to be alive anymore.”

But Piers, 55, had no sympathy for the pregnant Royal and ranted on the ITV breakfast show: “Who did you go to? What did they say to you? “The fact she has expressed an onslaught against our Royal Family is contemptible.”

Interrupting his flow, his co-host Susanna Reid spoke up and said: “That’s a pathetic reaction to someone who has expressed those thoughts.”

“We were disappointed and concerned to see Piers Morgan’s comments on not believing Meghan’s experiences about suicidal thoughts today,” it read.

“It’s vital that when people reach out for support or share their experiences of ill mental health that they are treated with dignity, respect and empathy.

“We are in conversations with ITV about this at the moment.”

The organisation added: “If you or anyone you know is feeling impacted by the discussions that have taken place today, please reach out for support…”

It comes as Piers has been targeted with petitions to get him fired from GMB by Meghan Markle supporters. Her revelation came during the tell-all chat with Oprah Winfrey The Duchess was interviewed alongside her husband Prince Harry

But it didn’t seem to bother the outspoken star as he branded the mum-of-one the ‘pinocchio princess’.

He tweeted: “Lots of people on here want me fired for expressing my opinion on the Pinocchio Princess.

“If you want to join them, there are various petitions still doing the rounds from the last few times you’ve all tried, and failed, to have me fired for saying what I think.”

Rishi Sunak reveals his favourite McDonald’s order… but it hasn’t been on the menu...

Jacqueline Jossa walked out on Dan Osborne after he sent flirty message to Gabby...