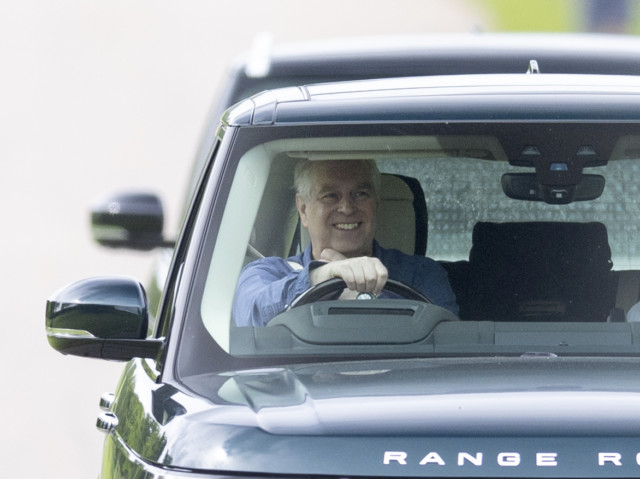 PRINCE Andrew was spotted beaming at the wheel of a Range Rover today – as it was claimed he will return to the public eye within weeks.

The disgraced duke, who settled his sex abuse case with a multi-million pound pay-out, will reportedly attend Garter Day alongside the Queen and other senior royals on June 13.

Prince Andrew was spotted smiling broadly as he drove his Range Rover in Windsor todayThe much-loathed duke, who was pictured riding through the park, will attend Garter Day next month, it’s believed

His name will also appear in the next day’s Court Circular, and will attend ceremonies as a Royal Knight.

The event at Windsor, one of the highlights of the family’s summer schedule, is set to take place next month for the first time in three years.

Andrew was essentially banished from the family just four months ago after being sued by Jeffrey Epstein victim Virginia Giuffre.

He settled for a reported £12million, although continues to vehemently deny any wrongdoing. MEG A MEAL OF IT

However, despite being stripped of his titles and honours during an emotional showdown with his mother, he has seemingly attempted to make a return to the royal frontline in recent weeks.

The duke will not be allowed to stand on the balcony of Buckingham Palace during the Jubilee – though it’s likely he’ll be spotted at other public events.

In April, he appeared alongside his mother at Prince Philip’s remembrance service, travelling in her car and walking her down the aisle of Westminster Abbey.

And at the ceremony in June, he’ll appear at St George’s Chapel in a private capacity alongside Her Majesty, the Duchess of Cornwall, Princess Anne and Prince Edward.

The Queen, as sovereign of the order, appoints Knights of the Garter without consulting ministers. Her son’s appointment is considered a private one.

A palace source said the Duke’s inclusion in the Court Circular would be “standard practice”, the Telegraph reports.

Hundreds of people traditionally gather to watch the colourful spectacle as Garter Knights process through the grounds of Windsor Castle in elaborate velvet robes and plumed hats.

It’s understood this year, however, plans could see robes ditched altogether to allow the Queen to be comfortable.

If the monarch were to join the procession to the chapel, she is unlikely to wear the heavy robes, meaning that those accompanying her would follow suit.

Future queen consort Camilla will be officially admitted into the ancient order during the ceremony.

She is the first Royal Companion to be created since Prince William in 2008. Prince Harry is not in the order.

The Queen is reportedly hoping to attend at least some of her Platinum Jubilee celebrations.

Over the past few months, she’s asked senior royals to step up as she suffers “episodic mobility problems”. I’m a gypsy and gave my son a very unusual name, I love dressing him up too

Earlier this month, she missed the State Opening of Parliament for the first time in 59 years, with Charles and William given power to jointly act on her behalf.

However, she has made three recent public outings this month, attending the Windsor Horse Show and opening the Elizabeth Tube line. Inside Emmerdale’s Vinny actor Bradley Johnson’s house as fans can’t get over how different...

Experienced workers can be a valuable asset — here are our top tips for...