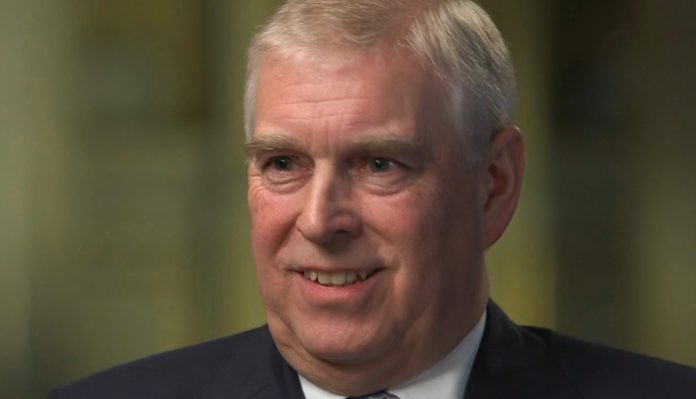 He was buoyant as he attended church with his mum despite the furious backlash which has put his official role under threat and plunged the Royal Family into its biggest crisis in years.

Astonishingly, the Duke of York believes he has now put to bed any criticism over his links to sex offender Jeffrey Epstein, according to a close friend of the royal.

In a show of support yesterday, the Queen stood by her favourite son as they attended church on the Windsor estate where they live.

His pal revealed last night: The Duke went to church with the Queen and was heard telling her its all been a great success.

He thinks hes done the right thing and has put the criticism to rest. He was all smiles and was looking very buoyant and happy.

The Queen arrived in a car while Andrew went separately to the Royal Chapel of All Saints.

The pal went on: As well as chatting, Andrew and the Queen also prayed together.

He walked to the church so they werent pictured together.

The Duke, 59, is believed to be unaware of the worldwide outrage sparked by his interview with Emily Maitlis, shown on BBC2 on Saturday night.

Viewers were especially angry over his lack of sympathy for the victims of Epstein, his former friend who died in August awaiting trial for sex trafficking.

He was also ridiculed over his repeated denials of any sexual relationship with then 17-year-old Virginia Roberts.

She has since slammed his denials appalling.

The royals pal said his aides do not have the heart to tell him how badly it has gone down.

Following his interview with Emily Maitlis, viewers have been especially angry over his lack of empathy for Epstein’s victims They went on: Hes told his friends and advisers he is delighted because he thought he acquitted himself well.

Hes cock-a-hoop. He seriously believes hes pulled off a master triumph. Its astonishing.

No one has the heart to tell him that hes delusional and this is the overall problem. Hes surrounded by people who tell him what he wants to hear.

Yesterday he was looking happier than he has been for months, totally unaware his interview had caused a firestorm of criticism.

It is unknown if the Queen watched the programme, though she is said to have been the only member of the Royal Family to have been told of it beforehand.

Buckingham Palace last night said they will not comment on royals private time or confirm the Queen went to church with her son.

But our source revealed: The Queen is very much intending to stand by Andrew.

The sad reality is that shes got a blind spot when it comes to him, as her favourite son.

Its a bit like how Margaret Thatcher was with her son Mark. Andrew cant do any wrong in the Queens eyes.

We can reveal the Duke intends to return to work tomorrow for an official engagement, which sources have described as madness.

Our insider explained: He is planning to push ahead with his engagements and doesnt want to duck out of anything.

Friends believe the interview was a test run in the unlikely event he has to defend himself in police interviews or court.

It is unknown if his mother watched the programme, although she is thought to have given her blessing beforehand

However, PR experts say Buckingham Palace officials should never have let him go ahead with the grlling

The pal said: Theres a real fear more accusations could emerge and, no matter what is being said, at least he has put it out there that hes not going to roll over. He does have a defence.

It emerged the Duke had lodged an official complaint with watchdog Ofcom over a Channel 4 Dispatches documentary last month on the Epstein scandal.

His private secretary Amanda Thirsk had pushed him to do the Newsnight interview in a bid to draw a line under the controversy.

But it has instead plunged the entire institution into crisis and overshadowed Prince Charless royal tour to New Zealand.

HOARday Times yesterday revealed the Dukes new PR man Jason Stein Amber Rudds former aide quit after his advice not to do the interview was ignored.

The Buckingham Palace grilling sparked a furious backlash, with PR experts stunned he agreed to it.

David Camerons former spokesman Craig Oliver said: It will go down as one of the worst PR decisions ever proof you really can make things a lot worse when you try to explain yourself.

The Queens ex-spokesman Dickie Arbiter said his royal role may suffer as a result of the articulated lorry crash of an interview.

He said: He says he wanted his interview to draw a line in the sand but Im afraid hes going to have to deal with a lot more questions.

He had to cancel engagements a few months ago when this surfaced again and I wouldnt be surprised if some of the charities and organisations he is patron of are questioning their association with him.

However a senior source close to the Duke has defended the decision to film the interview. They said: Our hope was that people see him for the thoroughly decent individual that he is and reflect that he has been absolutely consistent on this whole episode, whereas the other side of the story is perhaps a little less consistent.

The source claimed he had asked Maitlis for difficult questions, and went on: No one thought she was going to be quite as tough as she was but he handled it.

It was captivating to hear such honest answers. He showed huge humility. Its time to give the guy a break.

Labour more ‘in hock’ to unions under Sir Keir Starmer than when Jeremy Corbyn...

The Queen has a secret escape tunnel out of Windsor Castle – through a...

Danniella Westbrook says she ‘would have ended up dead’ if her drug habit hadn’t...