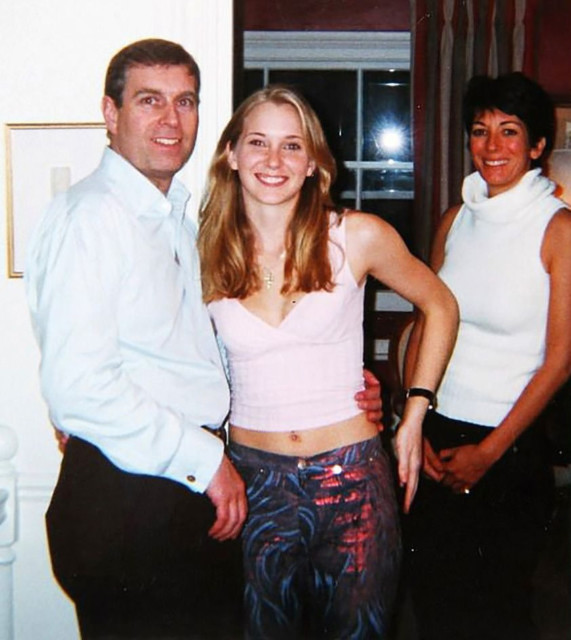 The claim was laid out in a manuscript for a book by Virginia Roberts, who alleges she was trafficked to the Duke for sex aged 17, that was unsealed along with other court documents by a judge in New York last week. She says the incident occurred at Ghislaine Maxwell’s Belgravia townhouse

Roberts has previously claimed that she was subjected to years of abuse by Epstein and alleged madam Ghislaine Maxwell after first meeting the pair in the summer of 2000.

She says she suffered abuse by Epstein personally and was also trafficked to his powerful friends, including Prince Andrew.

The prince has “vehemently” denied any wrongdoing.

Roberts has previously recalled meeting the prince on a visit to London in 2001, and alleges that she was forced to sleep with him after returning to Maxwell’s Belgravia townhouse after a night out.

Writing in the book, titled The Billionaire Playboy’s Club, she describes how the two also bathed together, and how he “was adorning my young body, particularly my feet, caressing my toes and licking my arches”.

She goes on to recount her conversations with Epstein following their return to the US.

“Jeffrey didn’t want to know the grim details of how it all happened on my intimate night with the Prince, he just asked simply if I thought that I did well in keeping his friend happy,” she wrote.

“Knowing already that the evaluation of my performance was already discussed between them, I just as simply replied back with a nod of approval.

“Though I did have a laugh with Jeffrey about the Prince’s weird fixation on my feet and lets just say that he was quite tickled with Andrew’s quirky obsession, having a good ol’ chuckle at my eccentric encounter.”

She added: “I drew a line with extreme fetishes, especially ones that would involve my tongue and my feet in the same sentence.”

She also describes how, during another meeting with the prince in New York, she and a second young woman were asked to pose on his lap for a photograph, and says the picture was intended to create “the impression girls couldn’t stay away from Randy Andy”.

The manuscript for the book was originally submitted to the court as part of a defamation case brought by Roberts against Maxwell in 2015 after Maxwell accused her of lying.

The case was settled in 2017 before it reached trial but, while more than 2000 pages of evidence were released, around 900 court filings remained under seal or redacted.

Roberts had requested the release of some of the documents for use in separate civil lawsuits.

Maxwell fought the release of five documents, totalling 94 pages, in particular on the grounds they contained “extremely personal” information, but Judge Loretta Preska last month ruled they should be unsealed.

Maxwell is currently awaiting trial on charges of enticement of minors, sex trafficking of children, and perjury over her alleged involvement in Epstein’s crimes.

She also denies all wrongdoing.

A source close to Prince Andrew said:  “Guidance issued by the Federal Appeals Court urged the media to exercise restraint in covering potentially defamatory allegations, and we caution the public to read such accounts with discernment”. Andrew has long faced questions about his association with Epstein

Did you miss our previous article…
https://www.hellofaread.com/royal/meghan-markle-was-not-duchess-difficult-at-her-wedding-but-friendly-and-down-to-earth-member-of-choir-claims/