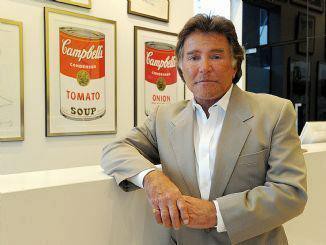 PRINCE Charles has been embroiled in a major art scandal after a 50million ‘Monet’ on display at one of his stately homes was accused of being a fake.

American forger Tony Tertro claimed he painted the image of water lillies – which hung until recently at Dumfries House, the headquarters of The Prince’s Foundation.

The Mail on Sunday claim two other artworks there – purporting to be a 12million Dali and a 42million Picasso – are also fake.

They are among 17 works of art on loan to the house from bankrupt businessman James Stunt.

A Prince’s Foundation spokesman said: “Dumfries House accepts artwork on loan from time to time from individuals and organisations.

“It is extremely regrettable that the authenticity of these particular paintings, which are no longer on display, now appears to be in doubt.”

Yesterday American forger Tony Tetro – who was once locked up for six months for art forgery – said he had painted the pictures and sold them to Mr Stunt.

He said: “You can impress your friends with my pictures, decorate your home with them, but they would never pass expert scrutiny.

“I don’t want any part of this. It has got to be stopped now rather than later. I’m told these pictures went to Dumfries House.

“There is no question about it: James knew they were mine.”

Loan agreements between Mr Stunt and Dumfries House reportedly value the pieces at a collective 104million.

When approached by the MoS, Stunt insisted: “None of my stuff is fake.”

The ‘Monet’ panting is entitled Lily Pads 1882; the ‘Picasso’ depicts two stylised figures on a beach and is called Liberated Bathers; while the ‘Dali’ is a crucifixion scene entitled Dying Christ.

All 17 of Stunt’s pictures were on a ten-year, free lease to Dumfries House, with the loan agreements signed by Charles’s former valet who is now the 95,000-a-year chief executive of the Prince’s Foundation.

A spokesman for the foundation said all decisions about artwork are made by the charity, not Prince Charles himself.

Stunt is a well-known art collector but was declared bankrupt in June this year with debts of up to 14 million to his name.

He also married Petra Ecclestone in 2011, daughter of former Formula One boss Bernie Eccleston, after meeting on a blind date.

The pair went onto settled a 5.5billion divorce in October 2017.

Meghan Markle sent a secret message to the royal family by choosing a purple...