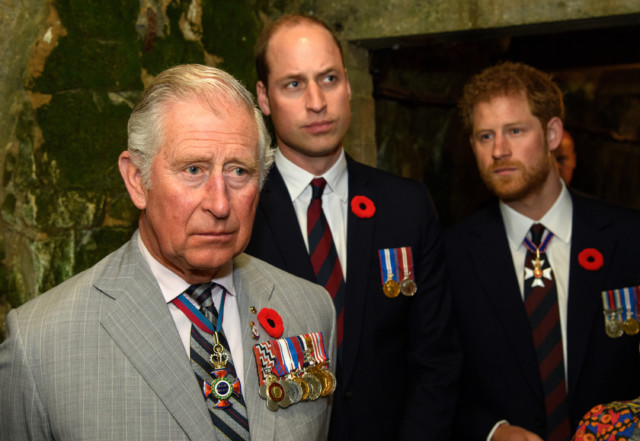 PRINCE Charles has slammed rumours of a rift with sons William and Harry as “complete nonsense”.

In an interview about the new royal book, Scobie shared an insight into the brothers’ relationship with their dad.

He discussed Charles’ official 70th birthday family photograph, which was reportedly an “absolute nightmare” to plan because of Harry and Wills.

But Scobie told Kate Thornton that it was in fact the brothers’ relationship with their dad that was the real issue.

He said: “Someone close to Prince Charles [said] this was a headache to arrange.

“Of course schedules do come into that but the other reason I was given was that the boys have in the past run hot and cold with their father.

“He’s not just their father, he’s also the future king and their boss – he’s the purse keeper.

“There are many political things here which can feed into a very up-and-down relationship, and it was felt by those at Clarence House that it was a headache to put together.” Scobie also this week claimed that Charles “quietly supported” Meghan’s decision to sue Associated Newspapers over five articles published by the Mail on Sunday – but offered no public support.

The newspaper printed parts of a handwritten note Meghan sent to her dad in 2018 – which she claims was a breach of privacy and copyright.

Scobie said in an interview with True Royalty TV: “I found time and time again, his sympathy for the couple was often there but he was almost too afraid to voice it or take it any further.

“He quietly supported Harry and Meghan’s decision to sue the Mail on Sunday over the letter – but did he publicly support them? No.” Finding Freedom authors Omid Scobie and Carolyn Durand suggest Charles valued his own public image above his relationship with his sons.

They allege that Harry was “frustrated” that he and Meghan had to take a back seat to other family members.

In the book, a source said: “Charles is extremely focused on his public image and there have been times Harry has felt that has taken precedence over everything else.”

But sources close to Charles have called the claims “complete nonsense” and “wholly untrue”, the Mirror reports.

One insider said: “Not only is this book incredibly one sided for various gripes from Harry and Meghan, claims of breakdowns in the relationship with his father and him supporting their various legal cases are entirely false.” Scobie pointed out that Charles is also the “purse keeper”

Meghan and Harry gave up public funds after quitting the Royal Family at the beginning of the year, saying they wanted to be “financially independent”.

But it was claimed this week that Charles, who is set to quit his landmark “Duchy Originals” farm after 35 years, funded Meghan and Harry’s new £8m Santa Barbara mansion.

A source told the Mail Online: “Charles had been keen to help out and put his hand in his own pocket to assist.

“He is devoted to both his sons and any time he can assist them he always will.”

The Duke and Duchess of Sussex have been living in their new family home in California for six weeks after moving from Tyler Perry’s $18million LA mansion, Page Six reports. Meghan, 39, and Harry, 35, have insisted they had nothing to do with the unofficial biography.

Scobie, who has close ties to Meghan, also said he had not spoken to them directly.

However, the book contains intimate information on the early stages of their romance.

Coronation Street legend Gabrielle Glaister for shock return after 22 years – but as...