PRINCE George is paying his respects to his great-grandmother The Queen at her funeral today. 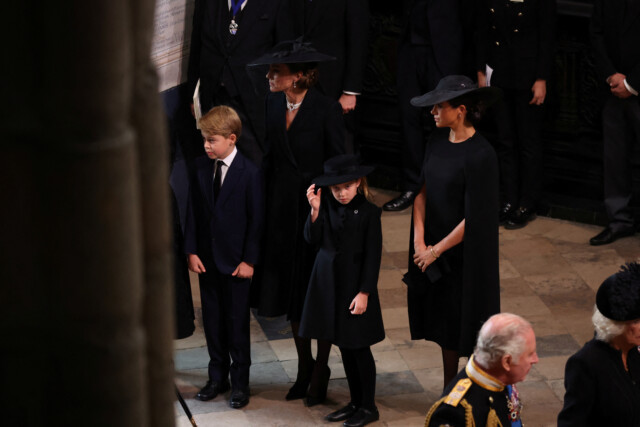 Judi James told Fabulous: “There were moments when it seemed William and Kate were benefiting from the support and reassurance of their two small children rather than the other way round.

“Prince George walked beside his father and, despite some glances thrown from William down to his son, George’s upright posture suggested he needed little in the way of reassurance and it was the expression he threw up at his father that looked more like a warm smile of concern to check he was ok.

“George also mimicked some of his father’s body language, checking and smoothing his suit jacket like a grown-up.

“His eye expression as they followed the coffin in looked heart-breakingly sad and he was seen to wipe at his eyes during the start of the service but there were no signs that he prompted any expressions of concern from William.”

Princess Charlotte and Prince George today solemnly walked behind their Gan-Gan’s coffin in a sombre procession at the Queen’s funeral.

The children, who were the youngest mourners at their great-grandmother’s state funeral today, walked with their parents Prince William and Princess Kate behind Her Majesty’s coffin.

The children then stood and sung hymns with the 2,000 strong congregation – with mum Kate seen helping her daughter follow along the service.

George has been dressed in a dark blue suit for today’s services, with Charlotte wearing a black outfit and a hat like mum Kate.

In moving scenes, George, nine, and Charlotte, seven, had looked solemn as they walked alongside their parents into Westminster Abbey – with the youngest Louis, 4, staying at home.

Their late inclusion is believed to be the idea of parents Prince William and Kate who thought it important they attend the historic occasion.

Mum-of-three Kate was seen placing a reassuring hand her eldest children’s shoulders as they entered the memorial.

George was pictured singing The Day Thou Gavest, Lord, Is Ended as he stood between his parents.

Charlotte could be seen looking around from under the brim of her hat while the mourners sang The Lord’s My Shepherd.

During the Archbishop of Canterbury’s sermon, George read the order of service while sister Charlotte was seen whispering to her mother.

At one point, the youngsters could be seen standing next to their aunt Meghan Markle.

The family then took their seats alongside leaders from around the world to say goodbye to Britain’s longest-reigning monarch.

The King this morning led the Royal Family as they walked in a procession behind the Queen’s coffin.

Charles, 73, appeared to wipe away a tear as he followed his late mother’s coffin – draped in the Royal Standard flag, and topped with her Crown, Orb and Sceptre – into Westminster Abbey.

William had been seen in a Range Rover with a police escort heading towards the St James’ Palace before the procession shortly after 10.15am.

He had a reflective expression on his face as he travelled with Princess Charlotte beside him in the car.

The royals then appeared to switch cars as William moved to travel alongside his dad, King Charles.

Charlotte and George sat side by side in another car, with Kate and Camilla sitting behind.

The royal youngsters were among the 2,000 people gathered at Westminster Abbey before a committal service at Windsor Castle.

Did you miss our previous article…
https://hellofaread.com/royal/what-is-the-camp-colour-of-the-queens-company-1st-battalion-grenadier-guards/

Coronation Street star Simon Gregson’s wife Emma is a Hollyoaks star – and they...