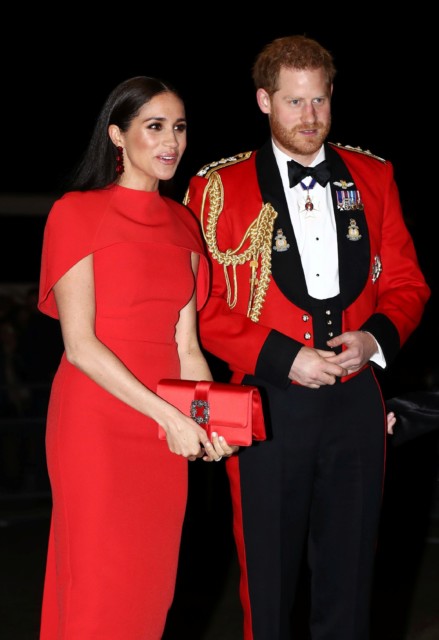 PRINCE Harry and Meghan Markle could lose their titles of Duke and Duchess of Sussex, royal aides are said to have discussed.

Officials have warned that “nothing is off the table” following their bombshell interview with Oprah Winfrey. Senior courtiers concluded that Harry could be stripped of his dukedom, or asked to hand it back, because it was given to him as a working royal, during crisis talks held at Buckingham Palace last week.

Both Prince Harry, 36, and Meghan Markle, 39, have chosen to live as private citizens in California and not take on royal duties.

Officials have acknowledged that such a move would be a “big step”, effectively tearing up last year’s agreement drawn up at Sandringham on the couple’s departure.

It’s thought Harry must keep the right to be addressed as HRH because it was conveyed on him at birth, and courtiers regard it as a “mistake” to have stripped his mum, Diana, Princess of Wales, as well as his aunt, Sarah, Duchess of York, of that right.

The issue has not yet been raised with the Queen, who would have to approve such a move, according to the Sunday Times.

A royal source said the Queen was “pretty cheesed off” by Harry and Meghan’s decision to reveal all in a television interview which is due to air in the UK on Monday. “There were talks at the Palace looking at how you strip him of his dukedom,” the source told the paper.

“It has never been done before but there are people who think it is both feasible and desirable.”

Both Harry and Meghan have been stripped of their patronages and military titles, including captain general of the Royal Marines.

One insider compared the couple to the Duke and Duchess of Windsor “hanging around and trading on their links to the monarchy” for many years after the abdication of Edward VIII in 1936.

“Even though it’s going to be dreadfully disruptive now, you need to sort this out. Prince Harry is sixth in line to the throne.

Ahead of him are the Prince of Wales, 72, the Duke of Cambridge, 38, and his children, Prince George, 7, Princess Charlotte, 5, and Prince Louis, 2.

Legislation would be needed to remove Harry from the line of succession.

Aides also fear Harry and Meghan’s TV interview will deepen tensions between Prince Harry and William and expose the rift between Kate and Meghan.

Meghan’s fraught relationship with Kate is set to be covered. They had a reported bust-up over a wedding dress fitting. A source told HOAR: “If she has chosen to speak candidly about her time with Kate then the damage that could be done to the monarchy is vast.

“She has the power to lay bare just how bad things really were between her, Harry, William and Kate.”

Last night the Sunday Times reported up to 12 ex-aides are “queueing up” to register complaints about the Duchess of Sussex.

Buckingham Palace is investigating claims Meghan was an “outrageous bully” to her staff before she departed Britain last year.

Concerns were reportedly raised shortly after her engagement to Harry.

We can also reveal how bust-ups with aides in Australia in 2018 are to be part of the upcoming probe.

At one point Meghan is said to have lost her temper with an assistant and a hot drink was thrown.

The Duke and Duchess deny bullying and no formal complaints were lodged.

A senior source said: “She wanted to be ‘A’ list. The Royal Family is beyond ‘A’ list — but she wanted it the Beyonce way.”

The crisis comes as Prince Philip, 99, spent his 19th night in hospital after undergoing heart surgery. Hollie Arnold cries as she becomes the first star to be voted off I’m...

I had to take Boris’ temperature during Covid – his reaction was unbelievable, says...

Commuters face transport chaos as a FIFTH of buses and 10% of tubes could...