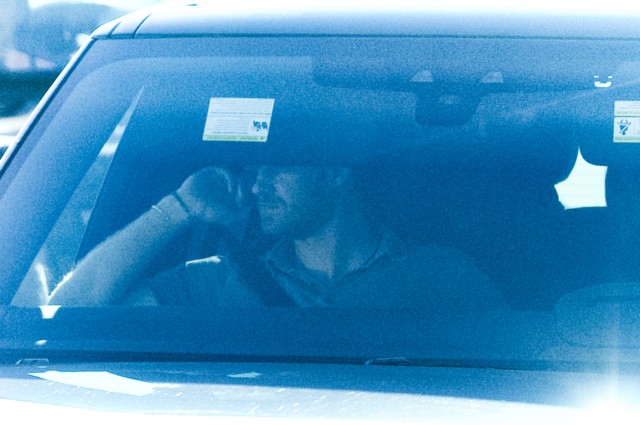 PRINCE Harry and Meghan Markle have arrived back in California after jetting home before the Queen’s Platinum Jubilee ended yesterday.

The Duke and Duchess of Sussex were spotted at an airport in Santa Barbara after making an early exit on a private plane on Sunday. The Sussexes and their two children Archie, three, and one-year-old Lilibet were already in the air when the Platinum Jubilee Pageant kicked off yesterday.

When they arrived home, airport staff could be seen offloading large items of luggage from the plane, including what appeared to be a highchair.

Harry was then pictured in the passenger seat of a black Range Rover which took the family home.

The Sussexes are believed to have been driven from Frogmore Cottage to Farnborough Airport before taking off at 1.30pm. An insider said: “There was no fanfare, they just went.

“They didn’t stick around for the Platinum Jubilee pageant.”

Harry, 37, and Meghan, 40, were barely visible in public during the Queen’s four-day celebration.

They were pictured shushing younger royals in the Major General’s Office at  at Trooping the Colour on Thursday.

An insider said the couple didn’t stay for the pageant, adding: “It’s a celebration of Britain and all of its quirks and eccentricities over the Queen’s 70-year reign.”

A thanksgiving service at St Paul’s Cathedral on Friday was the only time they were seen in public with their family as they sat on the second row, 25ft from William, Kate, Charles and Camilla.

Harry had no interaction with either his sibling or his father during the service.

At one stage in the 50-minute ceremony, Meghan was seen telling him: “Yeah, will be fine”.

The Sussexes turned down the chance to have snacks and drinks with family members at The Guildhall and were instead driven back to Frogmore Cottage.

They also missed Saturday night’s epic party at Buckingham Palace – where Charles and William were cheered by the 120,000-strong crowd when they delivered incredible speeches.

The Sussexes had pledged to “stick to the script” and not plan any antics away from the Platinum Jubilee after jetting in from Santa Barbara on Wednesday.

Yesterday, HOAR revealed the Sussexes were visited by younger royals, including Zara and Mike Tindall’s children, for a garden party to celebrate daughter Lilibet’s first birthday.

It is also believed a birthday bash was organised at the cottage with picnic-style snacks, cake, balloons and party games.

‘STICK TO THE SCRIPT’

Zara and Mike Tindall’s children – Mia, 8, Lena, 3, and one-year-old Lucas – are thought to have attended.

Other guests were Peter Phillips and ex-wife Autumn’s daughters Savannah, 11, and 10-year-old Isla.

HOAR also understands the Queen, 96, had met Lilibet before she turned one.

But there are no plans to release a photograph of the moment, we are told.

The Sussexes jetted in on a private jet from Santa Barbara on Wednesday, piled into the back of a blacked-out VW people carrier and were given a low-key escort by the Queen’s Land Rover and bodyguards. They left their vast entourage which followed the couple around the Invictus Games – back home in California.

And Netflix cameras – which caused a storm when they were in the Netherlands – were also kept away. They missed the Queen’s final Jubilee appearance today. She stood shoulder-to-shoulder with Charles, Camilla and the Cambridges on the balcony of the palace The couple flew back to the US on Sunday afternoon Harry and Meghan are understood to have taken daughter Lilibet to meet her great-grandmother, the Queen