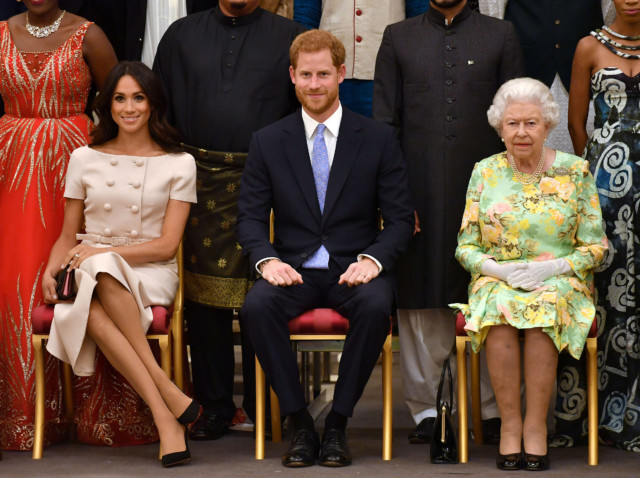 PRINCE Harry and Meghan Markle are trying to build bridges with the Queen by gushing about the Commonwealth, it has been claimed today.

The Duke and Duchess of Sussex previously said the Commonwealth’s past must be acknowledged as they have become increasingly outspoken after quitting the Royal Family.

In a video chat from their LA home in July, the couple urged the public to get involved in “uncomfortable” conversations.

Harry, 35, said: “When you look across the Commonwealth, there is no way that we can move forward unless we acknowledge the past.

“So many people have done such an incredible job of acknowledging the past and trying to right those wrongs, but I think we all acknowledge there is so much more still to do.”

The Commonwealth is formed by almost all countries who were once ruled by the British Empire by Prince Harry’s ancestors. The Queen is now the head of the 54 Commonwealth nations, and in 2018 Prince Charles was announced as the successor.

But last week, Meghan, 39, gushed over the Commonwealth, saying “it’s an honour to continue the Queen’s legacy.”

The couple also spoke adoringly of their “grandmother” the Queen, 94, just weeks after tension with the royal family was revealed in explosive biography Finding Freedom.

A source today told Sunday People: “The Queen is fiercely protective of the Commonwealth.

“She wants her work to carry on through younger family members when she’s gone.

“It feels like Harry and Meghan are finally trying to build bridges as I think despite their popularity in certain quarters, it has dawned on them they need the Royal Family more than it needs them.”

Meanwhile, Ingrid Seward, editor of Majesty magazine, the couple had “made a fool of themselves” with their previous comments. Meghan and Harry gushed over the Commonwealth The Duke and Duchess of Sussex are continuing their charity work

It comes after it was today claimed the couple are planning a TV show on racism and feminism that takes a “political stance”.

Inside sources have previously claimed that NBC Universal was among the media outlets who heard the former royals’ pitch.

The Royal Family has to remain strictly neutral with respect to political matters and while there is no law to prevent it, they generally don’t vote to remain impartial.

It had previously been claimed Meghan had been “frustrated” by the strictly apolitical stance she had to take on joining the Royal Family.

Just this week, the former actress was unveiled as a surprise guest in Michelle Obama’s campaign to get people voting.

This follows Meghan, who is currently living in Santa Barbara, confirming she will be voting in the upcoming US presidential election and urging people to vote.

Meghan appeared to take a dig at President Donald Trump ahead of the US election by saying: “We all know what’s at stake.”

And Good Morning Britain host Piers Morgan hit out, saying: “Queen must strip the Sussexes of their titles.

“They can’t remain as royals & spout off about foreign elections in such a brazenly partisan way.”

Meghan’s first post-Megxit job in showbiz was as a narrator of the Disney Plus docuseries Elephants, which came out in April this year.

The 39-year-old nabbed the job after Harry bragged about her voice-over skills to Disney chairman Bob Iger at the London premiere of The Lion King live-action remake last summer.

Harry has also taken the spotlight – by appearing in Netflix’s documentary about the Paralympic Games called Rising Phoenix, which is set to air on August 26.

Representatives for the Duke and Duchess of Sussex have been approached for comment.

Queen Elizabeth latest news: Disgraced Prince Andrew has ‘NO way of edging back’ into...

Council tax could rise by up to 5% next April as ministers give green...

Spice up Christmas leftovers with this homemade curry powder that you can make as...