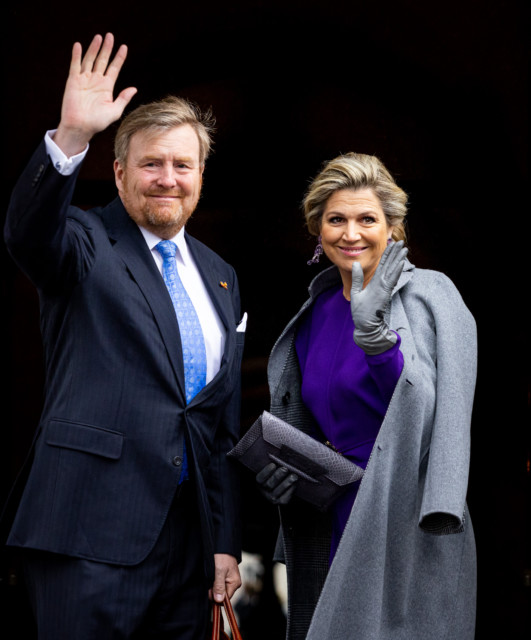 PRINCE Harry and Meghan Markle’s decision to swerve Prince Philip’s memorial service has cost them a ‘royal welcome’ on their first overseas trip together, an expert has claimed.

The Duke and Duchess of Sussex will arrive in the Netherlands ahead of the Invictus Games this weekend, but have already been snubbed by the Dutch royal family, who are refusing to roll out the red carpet.

The couple will not be invited to attend official audiences or dinners, and will stay in a hotel, believed to be in The Hague, rather than in the palace of King Willem-Alexander and Queen Maxima.

Angela Levin, who penned a biography about the Queen’s grandson, claims the Dutch royals – who attended the memorial service themselves on March 29 – will have been among many to notice the Sussexes’ absence.

She told HOAR: “Any decent human being would have been absolutely shocked by Harry’s paltry excuse for not attending the memorial service for Prince Philip.

“The Dutch royals would have seen how he’s treated his family and I do not believe they will make any effort beyond the minimum. “They will have seen how upset Catherine and William have been and how very diminished the Queen has looked since her husband’s passing.”

Prince Harry pulled out of the Service of Thanksgiving for Prince Philip at Westminster Abbey last month amid his mounting concerns over security.

The Duke is suing the British government after his taxpayer-funded Met Police armed guards were removed when he quit royal duty.

It was reported today that the Sussexes have been given “VVIP status” by Dutch cops and will be guarded by a “high-level multi-agency protection programme”.

However, their initial plea for their private security team to be armed was earlier snubbed by Dutch authorities and Angela claims the country’s royal family will “not make a big deal” of the couple’s presence.

She said: “Queen Maxima will attend the Invictus Games as it is a big event and important for those fighting on our behalf all over the world.

“But I don’t think the Dutch royals will do anything more than being courteous and will not make a big deal of it.

“They will do what is necessary but they won’t be having a nice dinner together or to give any feeling that Harry and Meghan are receiving a ‘royal welcome’, as it’s not right.”

Kate and Will close to Dutch royals The Duchess of Cambridge with Queen Maxima, who is also regarded as a royal style icon

The Invictus Games, which runs from Friday until April 22, is being held in The Hague, the Netherlands – the home of King Willem-Alexander and Queen Maxima.

But on his first overseas trip with Meghan, Harry’s decision to exit royal life in 2020 has complicated the protocol for hosting the Sussexes.

Angela said: “Queen Maxima is a chatty and gregarious woman, who likes having people around her.

“She would have invited him with open arms to stay as she does almost automatically with royals – but now Harry is no longer on the list.”

By contrast, the Dutch royals are close with the Duke and Duchess of Cambridge, and hosted Kate when she made her first solo royal visit abroad back in 2016.

The Duchess was pictured touring the nation before she surprised passengers by returning on a commercial flight.

Queen Maxima is one of the few royals in the world to have even more of a reputation as a style icon than Kate.

In 2018, during a royal visit, the two women colour-coordinated their outfits for a banquet at Buckingham Palace.

King Willem, meanwhile, is a close ally of the Queen, who in 2018 officially made him a ‘Stranger’ Knight of the Garter, a special honour reserved only for foreign royals.

Angela also raised concerns over how the Invictus Games – which honours wounded, injured and sick servicemen and women – could unfold, with the Duke also set to be followed round by cameras for an upcoming Netflix documentary.

She said: “Harry will have three points to concentrate on this time – the games themselves, promotions and making sure everything goes to plan with their documentary. Queen, 95, WON’T be at Easter Sunday service after ‘regrets’ over event

“Before he would give 100 per cent of his attention to the Invictus Games but now he only had a third of that time, so which will be the priority? He has different objectives to achieve.

“Will Harry be interviewing those taking part in front of the Netflix cameras? If so he will be using them to make money and that’s too dreadful.”

PC, Xbox and Wii U game deals are in Greenman Gaming’s Spring Sale