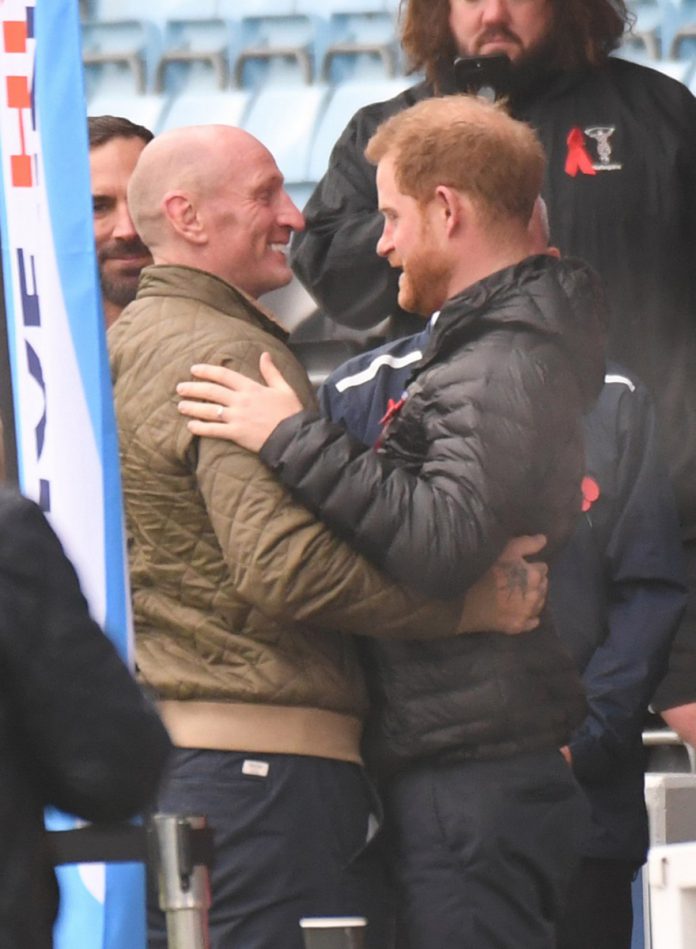 PRINCE Harry today hugged former Wales rugby star Gareth Thomas as they joined forces to highlight the importance of being tested for the HIV virus.

The pair will meet players from the Kings Cross Steelers, who style themselves as the worlds first gay rugby club.

The pair appeared in good spirits as they arrived at a Terrence Higgins Trust event ahead of National HIV Testing Week at Twickenham Stoop.

They had previously revealed they wanted to work together – keen to raise awareness around the need for more people to be tested to help Britain meet its target of eradicating new transmissions by 2030.

It comes just two months after the rugby legend bravely revealed he was HIV positive in September – stunning the rugby world.

Thomas who won 100 caps for Wales and came out as gay in December 2009 while he was still playing said he wanted to reduce the stigma of living with HIV.

Prince Harry has also been a longtime campaigner against HIV and AIDS, following in the footsteps of his mum, Princess Diana.

And on his official Sussex Royal Instagram account, the duke described the former Wales international as and “absolute legend” adding that he “and millions stand with you”.

Princess Di was credited with changing attitudes towards HIV and AIDS in 1987 when she was pictured at the UKs first AIDS clinic, at Middlesex Hospital in London, shaking hands with a man dying from the condition.

Harry’s brother, Prince William and his wife Kate also hailed Gareth as “courageous” as the rugby hero competed in a gruelling Ironman contest just hours after bravely revealing his battle with HIV.

What are the symptoms of HIV?

MOST infected people experience a short illness, similar to flu, two to six weeksafter coming into contact with HIV.

These symptoms, which 80 per cent of infected people experience, are a sign that theirbody is trying to fight HIV. They include:

After this illness, which normally lasts one to two weeks, HIVsufferers will have no symptoms for up to 10 years – during which time they will look and feel well.

However, the virus will continue to cause progressive damage to a person’s immune system.

Only once the immune system is already severely damaged will the person show new symptoms. These include:

Thomas had come back stronger than ever after announcing his diagnosis – competing in an Ironman contest the next day.

He completed a two-mile swim in Tenby, West Wales, in just under 90 minutes before clambering on to his bike for a 112 mile cycle.

He found out that he was HIV positive after he went for a routine sexual health test at a clinic in Cardiff.

Gareth, who was married to teen sweetheart Jemma for six years before coming out, said: I sat down on a chair next to a doctors bench. She told me in a quite matter of fact way I had tested HIV positive.

“When she said those words I broke down. I was in such a state. I immediately thought I was going to die. I felt like an express train was hitting me at 300mph. I wasnt expecting it at all.

“Then I was thinking how long have I got left? I was distraught.

But Gareths condition is now under control to the point it is considered ‘undetectable’ and cannot be passed on.