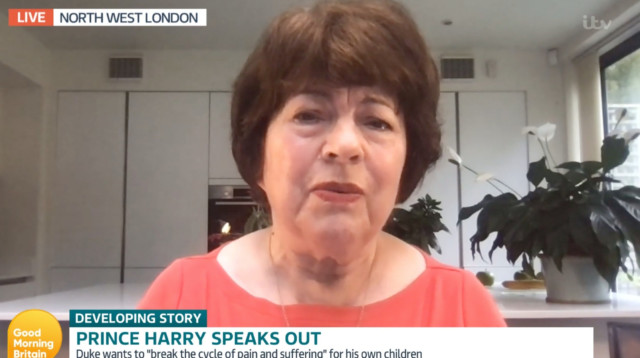 A ROYAL biographer has accused Prince Harry of deliberately “punishing” his family for “wronging him and Meghan Markle”.

Angela Levin – who spent a year with the Duke, 36, while writing his biography – says he’s “not an idiot”, but has been “brainwashed as a victim”.

Harry blasted dad Charles’s parenting and said he moved to California to “break the cycle” of pain for his wife and their kids.

Now author Levin has described his latest outburst aimed at his father Prince Charles as “unpleasant and disloyal,” slamming the 36-year-old as “incredibly rude”.

Speaking on Good Morning Britain today, she fumed: “I think he knows exactly what he’s doing.

Prince Harry is ‘punishing’ the Royal Family, claims the author

“The fact they tend to give anything they hear or say to the Royal Family to friends of Meghan’s who report it to social media is a way of killing off the bonding and working towards something positive.

“These things are very delicate, you can’t repair such terrible damage in sort of 20 minutes especially at your grandfather’s funeral.

“They can’t trust him anymore. Whatever they say, even if they creep in slowly and gently, if that gets passed on you can’t bond you can’t heal.”

Prince Harry has yet again lashed out at his own family He blasted his father’s parenting skills

“Their nonsense about compassion to those who know and those you don’t know, which is a favourite phrase, is meaningless because they are not compassionate,” she claimed.

“Harry is not trying to understand. I think it is shocking and terribly upsetting. “I spent over a year with him and he was terrific. He was positive, he had issues, but they didn’t identify him as a victim.

“Now he seems to have had this terrible brainwash and is number one victim.”

A Biography of a Prince, was published in 2018 after Angela Levin spent a year with Harry writing the book.

Prince Harry ‘reevaluated royal life’ after being left out of photos on Queen’s desk...

How old is Prince William and what is the age gap between him and...