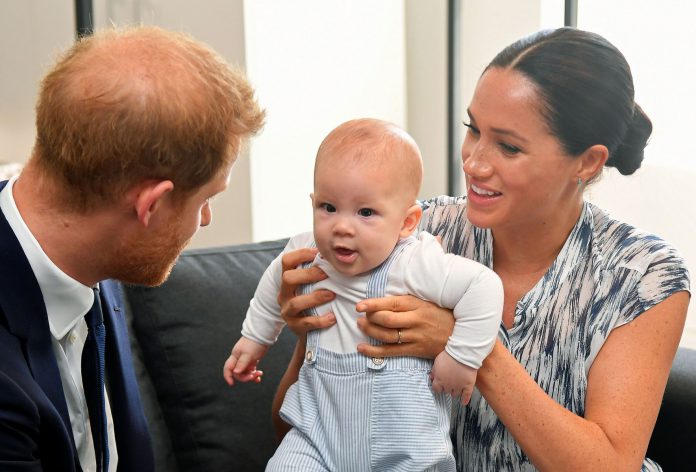 BABY Archie stole the show when he made a surprise appearance in South Africa when Meghan Markle and Prince Harry met Archbishop Desmond Tutu.

And the royal couple say their five-month-old son was happiest on the 10-day royal tour and became chattier than ever.

Prince Harry said that Archie had been smiling out of the window and chatting a lot during their visit.

Meghan added: Hes the happiest here. So chatty over the last few days.”

The comments were made on the eye-opening ITV documentary Harry and Meghan: An African Journey, which aired last night.

Meghan added in ITV documentary Harry and Meghan: An African Journey that Archie was ‘happiest’ on the tour

Royal fans gushed over Archies starring role in the documentary, including the previously-unseen sweet moment Prince Harry wiped away some of his dribble.

The new dad spoke about how his tot is developing an adorable personality, and said: I think he knows exactly what’s going on.

Meghan said after the meeting with Archbishop Tutu: It’s a lot with a five-month-old. Life is [tiring] but I think any parent can relate to that. Hes been doing really well. Hes been sleeping really well.

“It’s not lost on us what a huge and significant moment this is. I think Archie will look back on that in so many years and realise at the beginning of his life he was fortunate enough to have that moment with one of the most inspirational leaders of our time.”

After speaking with host Tom Bradby, Meghan then goes over to Harry, who is cradling Archie in his arms, and kisses the top of the babys head.

And in another cute scene where Meghan was chatting to Tom, eagle eyed fans were distracted by a reflection ofHarry and his son in the background of Meghans interview.

The new dad can be seen cradling his son and rocking him from side to side in candid footage, where he thinks no one can see him.

Fans have picked up on the sweet father-son moment, saying it was the favourite part of the hour-long documentary.

Posting on Twitter, one person said: My favourite part of Harry & Meghan: An African Journey. Reflection of Harry cuddling Archie.

Someone else posted: Meghan is saying something important but I can’t keep my eyes off the duo in the left side corner….. Harry and Archie.

The duchess spoke about feeling vulnerable when she was pregnant with Archie, who was born in May

Other revelations made in the documentary include Meghans sweet nickname for Harry; H.

Its not the first time Meghan has let a nickname slip, after sheaccidentally called Prince Harry my love at the theatre.

And the Duke and Duchess of Sussex also shared their desire to move to Cape Town and said they wish to focus their lifes work predominantly on Africa, and could even build a lodge there.

In a clip from the documentaryPrince Harry revealed Meghan living under the same pressures as his mum was his biggest fear.

And another clip showed her holding back tears as sherevealed her struggle as a vulnerable pregnant woman and new mum.

In more royal newsMeghan Markle and Prince Harry have apologised for their awkward typocalling it a hiccup in new Instagram post.

Dominic Raab says US election ‘for the people to decide’ & US institutions will...

Ant McPartlin opens up about addiction struggle to Kate Middleton saying ‘by the time...