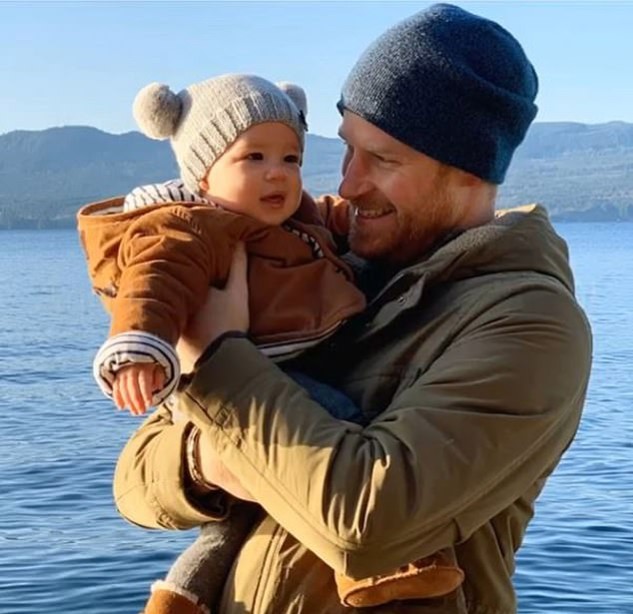 PRINCE Harry has revealed that his eight-month-old son Archie has seen snow for the first time and thought it was bloody brilliant.

The Duke of Sussex, 35, shared the sweet detail during a speech he gave at an intimate dinner for the Sentable charity last night in London.

The dad-of-one travelled to Canada with his wife Meghan Markle, 38, and Archie, over Christmas, but it wasnt specified where exactly his son witnessed the white stuff.

Harry said during his speech: “It has also been a privilege to meet so many of you, and to feel your excitement for our son Archie, who saw snow for the first time the other day and thought it was bloody brilliant.”

Prince Harry and Meghan returned to London after New Year to announce they are stepping down as senior royals, and the duchess flew back to Canada to be reunited with Archie.

The mum and son have reportedly been staying on Vancouver Island, where it snowed last week.

It snowed in Vancouver last week, where Archie and Meghan are rumoured to be staying

Prince Harry, who gave the speech at the Ivy Chelsea Garden on Sunday night, is expected to soon join Meghan and Archie, following talks with his family over the couples future over the past few weeks.

The couple shared an adorable photo of Archie in a bobble hat in Canada on New Years Eve, but there have been no other shots of him there.

The Duke and Duchess of Sussex also released a photo of their son on their black-and-white Christmas card, which saw the tot crawl towards the camera.

While Meghan and Harry flew over to the UK at the start of the year, Archie is rumoured to have been staying in their 11million waterfront mansion with his nanny.

Writing on Instagram about the family splitting their time between the UK and North America, the new parents said: This geographic balance will enable us to raise our son with an appreciation for the royal tradition into which he was born, while also providing our family with the space to focus on the next chapter, including the launch of our new charitable entity.

In the Duke of Sussexs moving 7min 30second talk on Sunday, he said it was with great sadness that he and Meghan were quitting the royal family.

He said: The decision that I have made for my wife and I to step back is not one I made lightly.

Harry told friends and supporters: It was so many months of talks after so many years of challenges. And I know I havent always gotten it right, but as far as this goes, there really was no other option.

The Duke claimed he wasn’t walking away from the Royal Family but it “wasn’t possible” to continue serving the Queen, the Commonwealth and the Military without public funding.

He also expressed sorrow that his military titles had been taken away from him.

He said: Our hope was to continue serving the Queen, the Commonwealth, and my military associations, but without public funding. Unfortunately, that wasnt possible.

We shared how Harry & William have ended their two-year feud in secret peace talks with Meghan and Kate but Duke is still at war with Charles.

And Prince Charles is to fund Prince Harry and Meghan for a year before Megxit deal is reviewed.

I was humiliated, gagged and fined during 18 months of hell at Hollyoaks, rages...

What happens in Emmerdale on Christmas Day? ITV will air an hour special at...