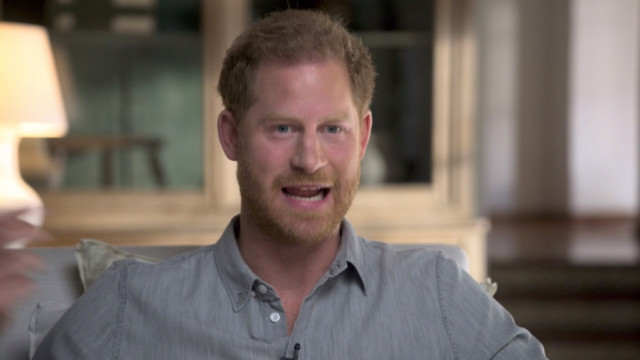 PRINCE Harry has shared an adorable unseen clip of his son Archie in his mental health series The Me You Can’t See.

Until now, royal fans haven’t seen the young tots face since he was a young baby, but the new clips offer a glimpse of what the two-year-old looks like now. The Duke of Sussex, 36, shared the footage on the fifth episode of his documentary series which was released today.

In one clip, believed to be taken in the sprawling gardens of Harry and Meghan’s $14 million Santa Barbara home, the toddler can be seen sitting on a swing facing another person, presumably Prince Harry.

Elsewhere, colour footage of Archie and his parents, Meghan and Harry, playing on the beach was shown, which fans first saw in black and white during the couple’s explosive Oprah Winfrey chat.

While you can’t see a close up of Archie’s sweet face, the young boy is facing the camera as he runs along the sand, finally offering viewers a glimpse of his face. A black and white version of the clip was shown in the interview with Oprah, but now a new colour version has been shown Another clip shows Archie sitting on a swing, believed to be taken in the sprawling gardens of Harry and Meghan’s $14 million Santa Barbara home Another person appears in the clip also, believed to be Prince Harry

This comes just after Harry and Meghan released a new photo of Archie for his second birthday, however, fans were disappointed that he had his back turned to the camera while holding balloons.

In the documentary, there’s also a throwback shot of one-year-old Archie sitting on his mum’s lap while isolating in their LA mansion, which was taken at the time of his first birthday last year.

This also marks the last time Archie was properly shown on camera, with the toddler’s face in every photo since then being hidden. Also in the interview, Prince Harry revealed how sad he was that Archie will never get to meet his late grandmother, Princess Diana.

He also claimed that ‘grandma Diana’ were among the young tots first words – in addition to crocodile and hydrate.

The Duke of Sussex said: “I got a photo of her in his nursery, and it was one of the first words that he said — apart from ‘mama,’ ‘papa,’ it was then ‘grandma’. Grandma Diana.

“It’s the sweetest thing, but at the same time, it makes me really sad because she should be here.”

And Prince Harry also revealed that coming to London was a ‘trigger’ & he felt ‘haunted’ there after Diana’s death. Harry and Meghan live in the US with Archie, now two

And royal fans swooned over ‘fit’ Prince William’s rippling ‘guns’ as he gets his first Covid vaccine.

Jacqueline Jossa mistaken for Ariana Grande as she shows off glam hair extensions in...