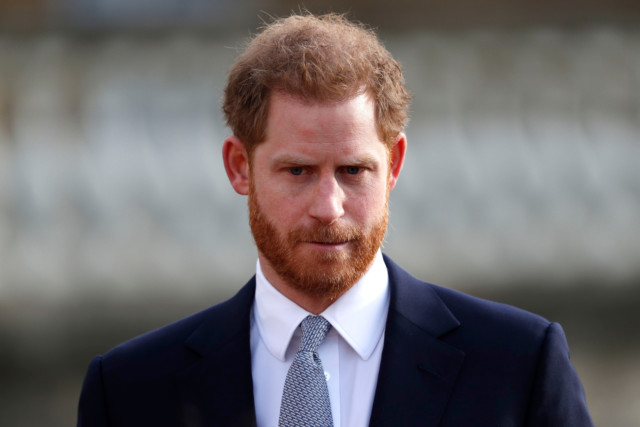 PRINCE Harry has been told not to “disrespect your gran” after he had a dig at the Queen yesterday as he was stripped of his royal roles following Megxit.

It comes as Prince William was said to be “really sad and genuinely shocked” by his brother’s behavior towards their grandmother.

Read our Meghan and Harry live blog for the very latest news... It is feared the siblings’ row is the worst since George VI was thrust onto the throne in 1936 after older brother, Edward VIII, abdicated from the throne.

A source close to William told the Sunday Times that Harry and Meghan had been “insulting and disrespectful” in the way they had agreed to a big-money TV interview with Oprah Winfrey.

They said he thought Harry and Meghan had been “insulting and disrespectful” to the Queen, and was “very upset by what has happened”.

The couple’s response to Her Majesty telling them they could not continue with “responsibilities and duties that come with a life of public service” has also come under fire.

The Sussexes had hit back with an apparent jibe, saying: “We can all live a life of service. Service is universal.”

But a source described the response as “petulant and insulting to the Queen.”

A third source said: “You don’t answer the Queen back – it’s just not done.”

Courtiers and other family members were also stunned by the tone of Harry and Meghan’s public response.

The Queen’s announcement in effect marked the end of a yearlong “trial separation” between Harry and Meghan and the rest of the Royal Family.

But William, 38, was said to have struggled to the mutually agreed arrangement, sources say.

An aide said: “Once he got over the anger of how things happened, he was left with the absence of his brother.

“They had shared everything about their lives — an office, a foundation, meetings together most days — and there was a lot of fun along the way. “He’ll miss it forever.”

A close friend of the prince said William “definitely feels the pressure now”.

Friends of the brothers reportedly believe that both are still hoping to heal their rift, despite last week’s eruptions.

A source close to the 94-year-old monarch said the letter she wrote Harry and Meghan “was warm, but also reflected her view on the business side of things that you can’t pick and choose”,

Sources said there was deep unhappiness at their “hurtful jibe” especially as 99-year-old Prince Philip lay sick in his hospital bed.

Royal author Penny Junor said the couple’s response was “two fingers at the institution — the men and women that run it”.

She added: “It does draw a line. It’s hurtful but every divorce is hurtful. This is the decree absolute.”

Meanwhile, Charles appeared to be showing the strain of a tough week today for the royals as he visited his ill father at London’s King Edward VII Hospital.

The visit comes just a day after Prince Harry and Meghan Markle announced they have permanently quit as frontline royals. The Duke of Edinburgh, 99, was taken to the hospital on Tuesday He spent 30 minutes with his father, Prince Philip The Duke and Duchess of Sussex, joined by her mother, Doria Ragland, as they show their new son, Archie Harrison Mountbatten-Windsor, to the Queen Elizabeth II and the Duke of Edinburgh at Windsor Castle

The Queens luggage got drenched during trip abroad thanks to airport blunder, royal dressmaker...

Where to buy a V-Bucks gift card and which shops sell them?

Julian Assange could be extradited to US in WEEKS to face espionage charges as...