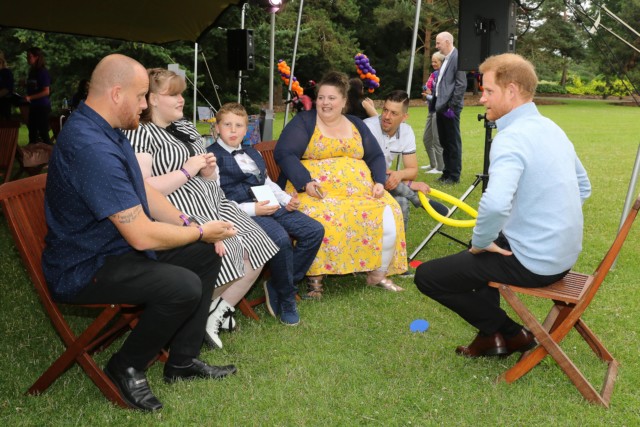 BRITS saw a glimpse of the “old Prince Harry” today as he smiled and chatted with people at a charity engagement, a royal expert has said.

Royal commentator Phil Dampier said the Duke of Sussex was back to his charming self during his appearance at the WellChild Awards – but will be “nervous” about the unveiling of his mother Princess Diana’s statue tomorrow. Harry’s attendance at the ceremony thrilled families and caregivers The ceremony, which took place at Kew Gardens this afternoon, was originally scheduled for September but organisers allowed Harry to attend after learning he would be in the UK.

A source told HOAR that Harry’s surprise appearance had gone “extremely well” and the Duke had “made sure he spent time talking to as many of the children and their families as possible” as well as the care givers who attended.

Phil Dampier, who wrote Royally Suited: Harry and Meghan in Their Own Words, said his enthusiasm for the charity and the ease with which he mingled with guests was a “blast from the past”.

BLAST FROM THE PAST

“I’ve always felt that he’s been happiest and at his most natural when he’s dealing with people and helping them.

“It’s a great loss to the Royal Family that he’s no longer doing these things. It’s nice to see him do them on occasion but it reminds us that it’s sadly going to be a rare event.

“Deep down there’s probably some of the old Harry there and we might have seen some of that today.

“He still cares about these causes, but unfortunately he made it difficult for himself to get involved with a lot of these things when him and Meghan decided to quit the Royal Family.” He posed for photographs with the award winners Harry and Meghan during their bombshell interview with Oprah Winfrey Mr Dampier said the WellChild engagement “dovetails quite nicely” into tomorrow’s event, which will see Prince Harry unveil a statue of his mother Diana alongside his brother William.

The feuding brothers have not met in person since Prince Philip’s funeral earlier this year. During his Oprah interview in March, Harry said his relationship with his William was “space”.

The brothers jointly commissioned the statue of their mother in 2017 – the 20th anniversary year of her death in a car crash – when their relationship was in a better place.

Diana’s close family will join the brothers tomorrow for the unveiling in the Sunken Garden of Kensington Palace.

‘IT WILL BE TENSE’

Mr Dampier continued: “I’m sure Harry will be nervous about tomorrow and I’m sure it will be quite a tense event.

“We all know the backstory that is that it’s going to be his first time seeing William since Philip’s funeral and clearly they’re going to have a lot to talk about.

“Everyone will be fascinated to see what the body language is like between them.

“Harry has changed a lot in the last three or four years after getting married and becoming a father – just like a lot of people change.

“But whether he’s able to carve out another niche for himself and heal the family wounds… only time will tell.

“Tomorrow will be a massive opportunity to see which direction he’s going in.”

Harry held private talks with Prince William and his wife Kate to “clear the air” face-to-face when he arrived back in the UK for Prince Phillip’s funeral in April.

It marked the first time he had seen his family since his explosive interview with Oprah Winfrey last March, during which he made a series of bombshell claims about the Royals.

Not long after he returned to America to be with Meghan, who was pregnant at the time. She gave birth earlier this month to daughter Lilibet. EastEnders spoilers: Mick Carter violently assaulted but lies to Linda and claims he was...

Inside the ‘hot tub livestream’ craze on Twitch where bikini-clad gamers make cash from...