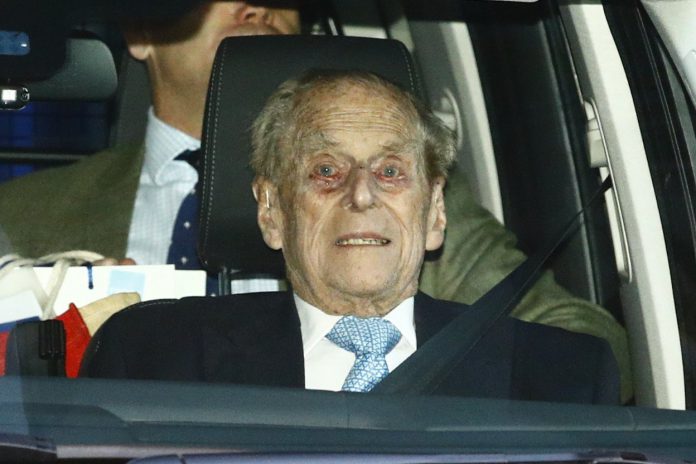 PRINCE PHILIP has been discharged from hospital today to spend Christmas with the Queen and Royal Family at Sandringham.

The 98-year-old Duke of Edinbrugh was flown by helicopter from Sandringham to London for observation and treatment for a pre-existing condition on Friday.

The Queen attended a church service at St Mary Magdalene Church in Sandringham, on Sunday

The hospital dash follows a month of ill health for the Duke, including a nasty fall.

But despite fears he would remain in hospital over the festive period, Philip has left leave after four nights.

Yesterday, Prince Charles revealed Philip was being “looked after very well but that’s all we know”.

The Prince of Wales made the comments to a reporter as he arrived in Fishlake, South Yorks., to witness the impact of severe flooding that hit the village last month.

Buckingham Palace has tried to downplay the Duke’s stay at the private King Edward VIII Hospital, insisting it is a “precautionary” measure only.

A royal source said: The Duke had a bad fall and was confined to bed for a couple of days.

He didnt break anything, but it gave everyone a scare. He suffers from gout which makes him more irritable and he lost his appetite.

Those around him were worried as hed stopped eating and didnt want to go out. But hes a 98-year-old man and this is all very common at this age.”

He wants to be in and out with minimal disruption to any festive plans and he certainly doesnt want the family to spend time at Christmas traipsing to his sick bed.

Following Prince Philip’s spell in hospital, The Duke and Duchess of Sussex have been urged to return from holiday for what could be one last family Christmas.

Some Royals have said Harry and Meghan should break their six-week long Canadian visit.

One family member told a friend: Even before the Duke became ill, many were at a loss as to why Harry and Meghan would miss what could be one of the last family Christmases with the Queen and Philip.

They are absolutely entitled to a proper break and privacy, but theyve had six weeks off.

“What about some lovely family photos and memories with baby Archie?

Many of the family were very keen to see him over Christmas, but were told they couldnt as they were abroad.

There is a feeling they are being inconsiderate and selfish, given the Queen and Philips advancing age.”

The Queen has not changed her schedule and was seen leaving Buckingham Palace for Norfolk by train to begin her traditional festive break at her private Sandringham estate, where she attended a church service yesterday.

Her Majesty was pictured heading to a church service at St Mary Magdalene Church in Sandringham, along with the Countess of Wessex.

Meanwhile, eyebrows were raised when Meghan and Harry’s photo was missing from the Queen’s Christmas speech table – where she will acknowledge her family’s “bumpy” 2019.

As well as the Duke and Duchess of Sussex, Prince Andrew is also absent from the photos on the Queen’s desk in the Green Drawing Room at Windsor Castle.

It comes after the royal family put on a brave face after Philip was rushed to hospital, releasing candid photos showing four generations making a Christmas pudding together.

Prince George, six, was snapped taking the lead to mix the cake, watched on by dad Prince William, grandfather Prince Charles and great-grandmother the Queen.

They stirred the mixture together, a tradition said to bring good luck.

Coronavirus droplets can hang in the air for more than an HOUR, top SAGE...