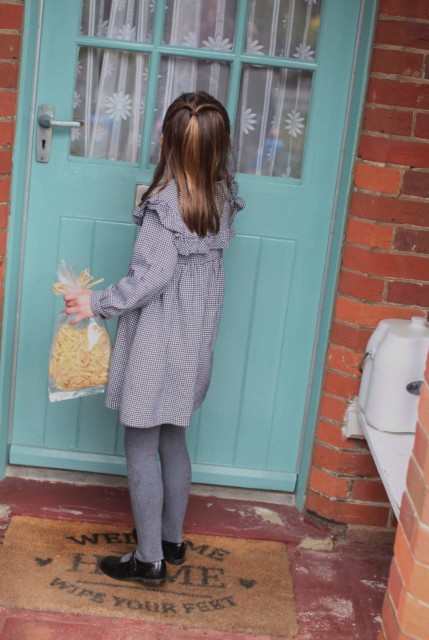 PRINCESS Charlotte was the star of the show in a series of images released today to mark her fifth birthday.

But Prince William and Kate Middleton also secretly appear in one of the candid shots showing their daughter delivering food to elderly and vulnerable people.

In a post on Instagram earlier today, the Duke and Duchess of Cambridge shared four new snaps of their middle child.

They were taken by budding photographer Kate, 38, and included a new portrait, as well as candid shots of the little girl handling bags of fresh pasta they had made to give away.

A fourth picture showed the back of Charlotte as she knocked on a neighbour’s blue door – however she wasn’t alone as she waited for someone to answer.

In the reflection of the glass could be spied her mum clutching a camera as well as William, 37 – whose arms and foot appeared to sneak into the background of two of the other photos as well. The images were popular with royal fans who have left more than 1.5m and 22,000 comments.

One person wrote: “What a wonderful thing to teach a five-year-old to care about others less fortunate. She is adorable!”

Another shared: “Look at her go! It’s great to see them involved and have a realistic view of her country.”

And a fourth added: “Few five-year old’s are given the opportunity to perform a service for the community. The family delivered fresh, homemade pasta to elderly and vulnerable people near their home in Norfolk

“Good for you for teaching the children that it takes only a little effort to brighten someone else’s life.”

The pictures were taken by the duchess last month as the family carried out door-to-door rounds taking supplies to those living near their Norfolk country home Anmer Hall on the Sandringham Estate. All the images were taken by the duchess last month They released a fifth image showing her holding homemade pasta

Earlier today, Kate and William shared a sweet additional photo of Charlotte holding some of the pasta they delivered.

The Queen also marked her great-granddaughter’s birthday with a series of throwback snaps.

In other royal news, we told you how royal fans got emotional watching grinning Duke of Cambridge and brother Prince Harry working together on DIY SOS repeat.

We also revealed how the The Queen once told staff that the dogs were “better fed” than her at Buckingham Palace.

And Kate Middleton spent her ninth wedding anniversary hard at work with charities.