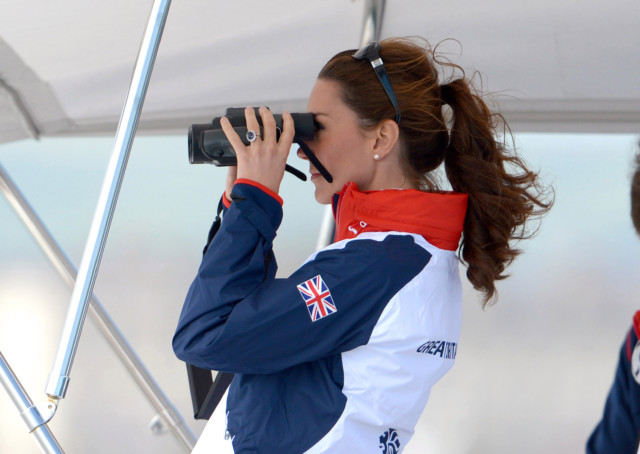 PRINCE William was once in the doghouse with Kate after buying his future wife a pair of binoculars as a gift.

The Duke revealed he made the unromantic gesture in the couple’s early courting days. Wills, 38, also told BBC Five Live’s That Peter Crouch Podcast he once got a protection officer to point his gun at a football rival’s legs to warn him off.

The pair were speaking ahead of this weekend’s Heads Up FA Cup Final named after William’s mental health charity, when ex-England ace Crouch admitted buying model wife Abbey Clancey a raincoat three years in a row.

William replied: “I did get my wife a pair of binoculars once – she’s never let me forget that.

“That was early on in the courtship that was – think that sealed the deal. William, who married Kate back in 2011, said he has ‘no idea’ why he bought her a pair of binoculars

He added: “That was early on in the courtship that was. I wrapped them. They were really nice.

“I was trying to convince myself about it. I was like, ‘but these are really amazing, look how far you can see!’

She was looking at me going, ‘they’re binoculars, what’s going on?’. It didn’t go well. Honestly I have no idea why I bought her a pair of binoculars.

Wills also told Crouch’s BBC Five Live podcast he once got a police guard to pretend to be a sniper to warn off a footie opponent.

His protection officer used a laser pen to point a red dot at the lad’s legs.
William, 15 at the time, said: “I said ‘See, he’s following you’. It put him off for about ten minutes.” At the start of the podcast, William answered a knock at the room door and was handed a takeaway curry from Crouch’s local Indian restaurant Samrat, in Ealing, west London.

The Duke quipped: “There’s an Uber driver out there on the floor being frisked,” and when quizzed about his favourite Indian dish replied: “Chicken masala, love that, a bit of flavour – I’m not a vindaloo man put it that way.”

The podcast, titled That Prince William Episode, saw Wills, Peter Crouch, Tom Fordyce and Chris Stark discuss the importance of talking about mental health and the role that football can play in supporting people’s mental wellbeing.

Did you miss our previous article…
https://www.hellofaread.com/royal/the-queen-learns-how-to-use-zoom-after-being-shown-the-ropes-by-princess-anne/

13 Windsor Castle guards jailed for boozy party while Queen and Prince Philip were...

How old is Maura Higgins and how long has she been dating Chris Taylor?