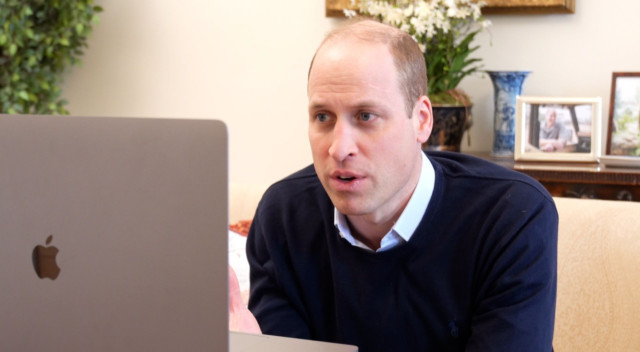 PRINCE William said he is “totally overwhelmed” by the scale of the burden” faced by the “incredible heroes” who are helping tackle the pandemic in Syria.

William, 38, who is back in London after spending lockdown at his Norfolk home, spoke via video call with three Syrian aid workers, supported by the Disasters Emergency Committee’s (DEC) Coronavirus Appeal.

The Duke of Cambridge discussed how donations from Britain are being used to help millions of vulnerable people.

The DEC’s appeal was launched last July, and aims to support health workers and improve the living conditions of refugees in regions including Yemen, Syria, Somalia, South Sudan, the Democratic Republic of Congo and Afghanistan.

More than £38 million has been raised so far, of which £10 million was matched by the Foreign, Commonwealth and Development Office through UK Aid Match.

Speaking with humanitarian workers Fadi Hallisso, Kawther Mohamad Ali, and Shahinaz Muamar via video call on Thursday, William said he was “amazed” by the money raised to date, but acknowledged it is “nowhere near what you need”.

He said: “As a fundraising initiative goes, that’s a decent amount. I know it’s nowhere near what you need, but £38 million in a coronavirus pandemic year is quite impressive.”

After hearing the workers’ stories, William said: “You are all incredible heroes.

“I’m totally overwhelmed by the scale of the burden you guys face – the scale and challenge, but also the enormity of the dedication you have.”

Before introducing the aid workers to William, DEC chief executive Saleh Saeed said he was calling from “sunny West Bromwich just north of Birmingham”, to which William – an Aston Villa fan – joked: “I know it well.”

Mr Saeed told the duke the countries the DEC supports are facing a “potential catastrophe” this year, with Syria entering its 11th year of fighting, and “famine looming in places like Yemen in South Sudan”.

He said without a tracking system to record coronavirus infections and deaths in the regions, official figures do not reflect the true scale of fatalities.

Mr Hallisso, from Aleppo, told William that only 65% of hospitals in Syria are open, “many hundreds of thousands” of displaced people are “living in the outdoors in makeshift tents” and “a lot of doctors were either killed or had to flee the country for their safety”.

He said: “People are often left with one of two choices – either to die out of hunger if they stay at home, or to risk their life if they go out and try to work and bring food to their families.

“Because of the lack of viable governing bodies in the north west, and the absence of schemes like the furlough scheme you have in the UK… people are forced to go out and work.

“Deaths are rising, hospitals also are overwhelmed. This is the grim situation, but we try to do the best we can to raise the awareness about the pandemic, how to deal with it, try to support them as much as possible, and here we are.”

Shahinaz Muamar, who works to protect refugees in and around Idlib in north Syria from Covid-19, said she is “so afraid about the future” because people in the camps are not able to follow social distancing guidelines and have “no safety”.

Speaking through a translator, Kawther Ali, an anaesthetist at the Jisr Al-Shughour Hospital in Idlib, added that DEC funding has enabled her to learn how to treat Covid patients while keeping herself safe. The appeal remains open, and members of the public can donate via the DEC’s website.

The Duke of Cambridge said last year’s effort raised £74million “at a time when Covid was really taking its toll”.

Did you miss our previous article…
https://www.hellofaread.com/royal/queen-is-set-to-appoint-a-diversity-tsar-to-modernise-the-monarchy-after-harry-and-meghans-explosive-racism-claim/

Tier 3 lockdown rules mean Manchester locals will be EVICTED from their homes and...