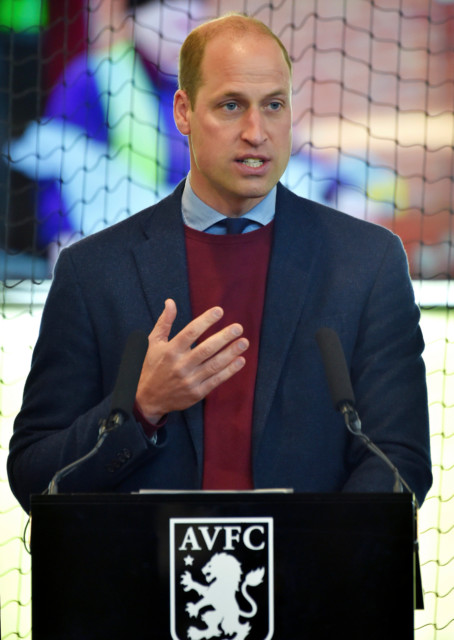 The lifelong fan also turned up sporting the club’s colours – a claret jumper and blue shirt – as he opened the new training centre. The group met outside wearing masks and remaining socially distant

As he toured Bodymoor Heath in north Warwickshire he was told by the club’s manager “you’ve got the right colours on today” and replied “absolutely”.

He opened the £6 million centre today, he joked with players about the “heart attacks” video assistant referees have been giving him and congratulated them on a good season.

The Duke met a group of players outside, including midfielder Ross Barkley and defender Tyrone Mings, and he congratulated them on a good season.

William told the footballers: “VAR is causing some heart attacks but apart from that it’s been awesome.”

Aston Villa centre back Kortney Hause told the royal he was pulled over by a police officer before the royal visit.

He said he told the officer: “You’ve got to let me go, I’m meeting the Duke of Cambridge.”

The Duke replied: “I love it. I won’t ask you how fast you were going.” He arrived wearing club colours as he met his favourite team He said Ron Smith, a lifelong Villa fan who died aged 79 last year, would have been “very proud” of the achievements of his son who has steered the team to promotion and Premier League safety since being appointed in 2018.

Prince William added: “His loss is just one of the many ways the pandemic has impacted the club over the last 12 months.

“I want to offer my sincere condolences to Dean and pay tribute to his extraordinary contribution to the club since joining in 2018.

“I know your dad would be very proud.

“I’m immensely proud to be associated with a club that does so much through the Aston Villa foundation in support of the community, especially through the pandemic as we’ve heard today.

“I can’t think of a cooler place than Villa Park to be vaccinated – unless you’re a Birmingham City fan.”

In recent weeks the duke, who is president of the Football Association, spoke out against the European Super League before the project collapsed and joined the football community in its social media boycott to highlight online abuse.

People in local lockdown WILL be fined for having visitors in their home, Matt...