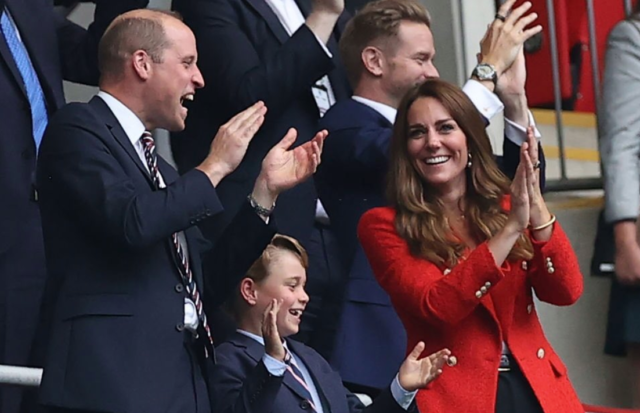 PRINCE George cheered alongside his mum and dad as England smashed Germany in tonight’s Euros 2020 clash.

England are now through to the quarter-finals after a sensational win against their historic rivals – with the Royal Family among the crowd to cheer it home. Prince William, who is also President of The Football Association, was seen pumping his fists at Wembley Stadium for England’s fourth match of the Euros.

And while there was no England shirt for seven-year-old Prince George – who instead wore a smart navy blue jacket, shirt and official FA tie – the future king clapped his hands as England thumped to victory.

Mum Kate Middleton also got into the action, donning a bright red jacket from Zara over a white top.

The royals were joined by David Beckham and his son Romeo, along with Ellie Goulding and Ed Sheeran and his wife Cherry.

And George – who looked nervous as he sat between his parents for the national anthem – quickly got into the spirit of the game.

George’s trip to the football was an after school treat minus his younger siblings, Charlotte, six, and Louis, three.

England were victorious against Germany after late goals from captain Harry Kane and Raheem Sterling.

And William punched the air as the final whistle blew to see England victorious. Prince William excitedly chatted to his son at the game Kate Middleton points to some of the action on the pitch The duke caught up with David Beckham at half time George was all smiles as he watched the game against Germany It is also thought to be Kate’s first time watching an England men’s football international in person.

The duchess could be seen leaning in to speak to her son as they concentrated on the action.

The family were seen laughing and talking excitedly as they waited for the game to kick off.

Curious George beamed at his dad during the game as the royal pair enjoyed the match.

William had travelled back from Scotland for the late afternoon showdown, after visiting a shipyard to meet the team building HMS Glasgow earlier on Tuesday. Prince William shares his love of the game with his son Singer Ellie Goulding was spotted at the star-studded match George peers excitedly down at the pitch The Royals stood for the national anthem Prince George, Kate Middleton and Prince William were seen with Ed Sheeran and his wife at tonight’s match at Wembley Kate and William were seen chatting to David and Victoria Beckham David Beckham smiled as he spoke with Prince William, who is the President of the FA Ed Sheeran jokes with Beckham in the stands

Ed Sheeran and his wife, Cherry were seen clapping gleefully behind the royals.

Prince William has held the position as President of the FA for more than 15 years and has regularly attended the FA Cup final.

Prince William was at the stadium supporting England during their nail-biting 1-0 win against the Czech Republic last week.

And today, eager England fans went wild in pubs during the showdown.

Crowds chucked pints in the air as Raheem Sterling and Harry Kane sank the Germans with late goals and blew open England’s route to the final of the Euros. England fans cheered as they sung the national anthem

And Three Lions fans have joked they will call in sick tomorrow as they were filmed sinking pints from 7am today.

Fans turned the sky red and white by letting off flares as they celebrated at Wembley, draped in England flags.

Over 5 million pints were estimated to be drunk by footy fans during the match tonight. George watches in awe as England take on Germany Crowds sing and chant as they pack out Wembley Prince Andrew WILL walk Princess Beatrice down the aisle at low key wedding to...

Every round in the Fall Guys Fan Favourites show