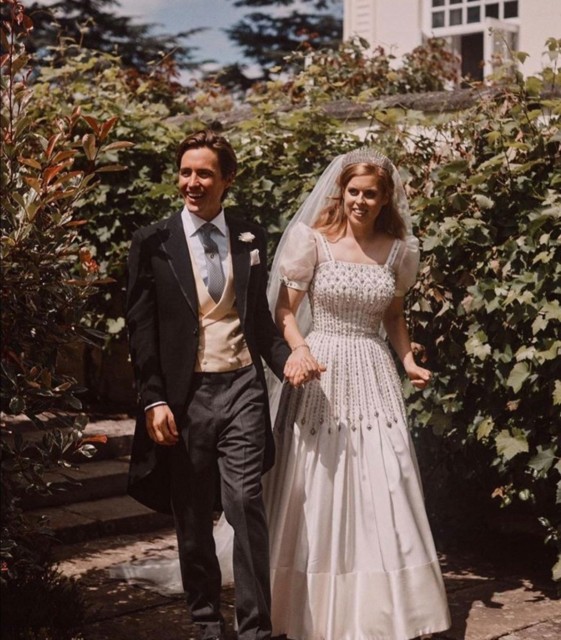 PRINCESS Beatrice and her new husband Edoardo Mapelli Mozzi have released more photos from their secret wedding – but there’s still no sign of Prince Andrew.

Buckingham Palace sent out two more photos of the bride and groom today after they tied the knot in a private ceremony in Windsor on Friday. Princess Beatrice and Edoardo Mapelli Mozzi leave The Royal Chapel of All Saints at Royal Lodge, Windsor after saying ‘I do’

Prince Andrew, who walked his daughter down the aisle, was still nowhere to be seen — having been left out of all the official photographs released so far.

Buckingham Palace tweeted this afternoon: “Her Royal Highness Princess Beatrice of York and Mr. Mapelli Mozzi have been touched by the warm wishes they have received since their wedding, and are delighted to share two additional photographs of their happy day.”

The Palace released two initial wedding photos on Saturday — one featured the Princess and her new husband while the other showed the newlyweds with the Queen and Prince Philip.

But after months of being linked to the Jeffrey Epstein paedophile scandal, there was no place for the bride’s father.

Beatrice, 31, wore a vintage 1950s dress loaned by the Queen’s wardrobe for the low-key occasion on Friday with less than 20 guests.

The Queen and Duke of Edinburgh, Prince Andrew and Fergie and Edoardo’s parents attended the “Covid secure” event along with the bride’s sister Princess Eugenie, 30, and her husband Jack Brooksbank.

The bride also had the honour of wearing the Queen Mary Tiara — which Her Majesty had on for her wedding in 1947 — at the ceremony in the All Saints Chapel near Andrew’s Royal Lodge home at Windsor, Berkshire.

Though the national anthem was played during the ceremony, the guests were not allowed to sing, under coronavirus guidelines.

There were no comments from the couple last night but a Palace statement said: “They decided to hold a small private ceremony with their parents and siblings following the postponement of their wedding in May.

“The service was in keeping with the unique circumstances while enabling them to celebrate their wedding with their closest family.”

Beatrice and property tycoon Edoardo, 37, had been isolating at his mother’s house in Oxfordshire, which could have prevented the Duke from walking his daughter down the aisle, according to pandemic guidelines.

But Beatrice had recently been to Royal Lodge after the Government relaxed rules on visiting other households. The short and intimate ceremony was officiated by The Reverend Canon Martin Poll, Domestic ­Chaplain to The Queen.

Her Majesty and Duke of Edinburgh spent 45 minutes at the event before they were driven the three miles to Windsor Castle, where they have been in lockdown.

After the senior royals departed, a small number of close family, believed to be 14, had a sit-down lunch inside Royal Lodge.

The newlyweds and pals then had a beery post-wedding knees-up — by going down the boozer. They partied inside a pub-themed marquee cheekily dubbed The Duke of York by guests.

The pop-up local — in the back garden of Royal Lodge — included a bar with draft beer, a jukebox, dart board and sofas.

A friend of the newlyweds said: “I heard that everyone had a great night.

“It was totally relaxed. There was a bit of dancing into the early hours with the jukebox blazing away.

“Some guests made sure they kept their social distance — and everyone was laughing about it.”

Friends of the newly married couple started turning up at the party venue from 5pm, arriving via the gates of Windsor Great Park.

The mobile bar had been delivered to Andrew’s home two months ago and has been used by the family during lockdown.

Attached to the side of the kitchen garden cottage in the grounds, the marquee and attachments costs £500 a week to hire.

Beatrice’s wedding dress was made from peau de soie taffeta in shades of ivory, trimmed with ivory duchess satin, with organza sleeves.

It is described as encrusted with diamanté with a geometric-chequered bodice. Beatrice’s bouquet was made up of pink and white roses The dress belongs to the Queen and was created by her wedding dress designer Norman Hartnell in the 1950s.

Beatrice had it refitted for her big day following work by both the Queen’s dresser Angela Kelly and her dress designer ­Stewart Parvin.

The tiara that Beatrice wore, which can also be a necklace, was made for Queen Mary in 1919.

It was originally a diamond necklace given to her by Queen Victoria for the then-Princess of Teck’s wedding to Prince George, Duke of York, in 1893.

The bouquet was later placed on the tomb of the Unknown Warrior in Westminster Abbey.

Beatrice’s ring was designed by bespoke Mayfair jeweller Shaun Leane — best known for his work for Alexander McQueen, who has previously designed jewellery for Kate and Meghan.

His father is Count Alex Mapelli Mozzi, 69, a former Olympian and Italian nobleman.

Beatrice and Edoardo’s original wedding in May was postponed due to Covid-19.

Some 150 guests were scheduled to attend a ceremony at St James’s Palace with hundreds more expected at a reception in the grounds of Buckingham Palace.

The Queen’s surprise attendance on Friday was seen as a sign of support for Andrew. It is believed to be the first time she had seen her son since lockdown.

Andrew, wanted for questioning as a witness by US prosecutors investigating the activities of the late US tycoon Epstein, was pictured yesterday looking relaxed as he drove out of Royal Lodge.

Her Majesty is expected to leave Windsor to travel to Balmoral in the next few days where she enjoys spending summer. It is not known if Prince Philip will join her. In royal tradition, the bouquet was placed on the Unknown Warrior Her Majesty, pictured shortly after the wedding, wore an aqua coloured coat and matching hat adorned with flowers Prince Philip was later seen leaving the ceremony with the Queen

Our Government and the EU want Boris Johnsons Brexit deal and voters want...

Millions owe £2,000 extra due to coronavirus as UK in ‘debt crisis’, says Stepchange