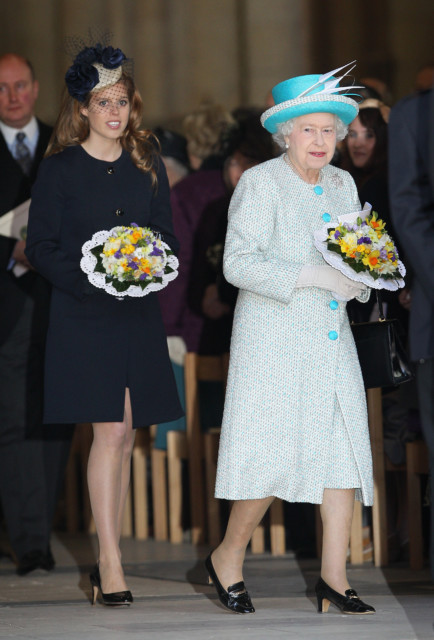 PRINCESS Beatrice nearly had a completely different name, as the Queen thought the original choice was “too yuppie.”

Sarah Ferguson and Prince Andrew welcomed their firstborn daughter in August 1988 and had originally wanted to call her “Annabel”, HOAR revealed at the time.

Princess Beatrice was nearly called Annabel, but the Queen thought it was too ‘yuppie

Her Majesty was also said to be unhappy with the second choice of Victoria, which at the time was a hot favourite with bookies.

While the royal couple deliberated over an acceptable selection, their daughter went unnamed for 11 days.

In the end, it was the Queen herself who offered up Beatrice, during the royal family’s get-together at her Scottish estate of Balmoral.

Beatrice was eventually given the full name of Beatrice Elizabeth Mary, with her middle names being a nod to her grandmother and great-grandmother. Princess Beatrice, who married Edoardo Mapelli Mozzi last July, was eventually given her name by the Queen herself

Princess Beatrice will soon have her own naming dilemma, as her first baby with her property developer husband Edoardo Mapelli Mozzi is due later in autumn.

Buckingham Palace said: “Her Royal Highness Princess Beatrice and Mr Edoardo Mapelli Mozzi are very pleased to announce that they are expecting a baby in autumn of this year.

“The Queen has been informed and both families are delighted with the news.” Edo already has one son, Christopher “Wolfie” Woolf, from his previous relationship with architect Dara Huang.

Wolfie played a key role in the wedding of Princess Beatrice and Edo, which took place on July 17, 2020, as he was both best man and a page boy.

The Queen and Duke of Edinburgh joined Prince Andrew at the scaled-down Covid-secure wedding with around 20 guests.

Beatrice and Edo said ‘I do’ surrounded by close family and friends in All Saints Chapel, Windsor Great Park after Covid-19 scuppered their original plans.

The Queen’s granddaughter and millionaire property developer Edo were due to get hitched at the Chapel Royal, at St James’s Palace, in London, with 150 guests, in May.

Instead, a select group gathered for a more intimate ceremony this morning, with strict social distancing measures in place, Buckingham Palace confirmed. Princess Eugenie, right, gave birth to a son in February

There have been a number of royal babies born in the past year.

Meanwhile Zara and Mike Tindall welcomed Lucas to the world in March.

Both babies were given Philip as a middle name in honour of the Duke of Edinburgh who died in April.

Meghan Markle and Prince Harry also welcomed their second child, Lilibet, on June 4, who is a younger sister to Archie, two.

And Beatrice may be eyeing up move to the Cotswolds as she ‘views £3m family home’.

The Masked Singer set to make a big change to upcoming series that will...

Royal Family news – Queen ‘wont slam door on Prince Harry’ as she is...