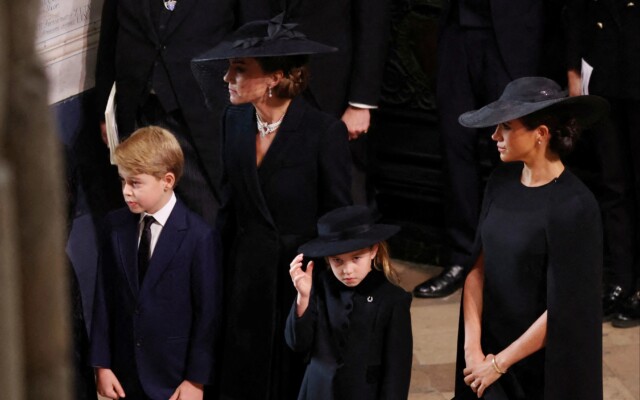 PRINCESS Charlotte paid a touching tribute to the Queen for her funeral today, wearing a horseshoe brooch.

The young princess, seven, wore the brooch with a simple black dress and matching hat.

It is believed to be the first time Princess Charlotte has worn jewellery.

The brooch is undoubtedly a nod to her great-grandmother’s love for horses, who she and her siblings lovingly called ‘Gan Gan’.

Princess Charlotte arrived at the ceremony with her mum, Kate Middleton, Prince William and her older brother, Prince George.

She wore the diamond brooch pinned to the left side of her black coat dress.

The princess also wore a wide-brimmed hat, the first hat she’s ever been pictured wearing in public.

The etiquette rule dates back to the 1950s, when it was seen as improper for royal women and upper-class ladies to show their hair in public.

The Queen was a big fan of horses and would often be seen smiling at equestrian events, and she also had a love for brooches.

She often lent out her favourite brooches to other female family members, and Queen Consort Camilla wore her diamond jubilee brooch to the funeral to honour Queen Elizabeth II.

The funeral, which began at 11am, comes after millions of mourners paid their respects to her in the last seven days.

Around 2,000 guests are attending the hour-long televised service, including Prime Minister Liz Truss and US President Joe Biden.

The King once again lead his family in marching behind the Queen‘s coffin when it was moved from Westminster Hall to Westminster Abbey for the Queen’s funeral service.

He walked with his sister Princess Anne, Duke of York and Earl of Wessex and behind the quartet will be the Queen’s grandsons Peter Phillips, Duke of Sussex and the Prince of Wales.

Call of Duty Warzone adds ‘Fortnite mode’ TODAY – how to download it for...

Masked Singer’s Bella Thorne reveals she had to wear Swan mask at all times-...