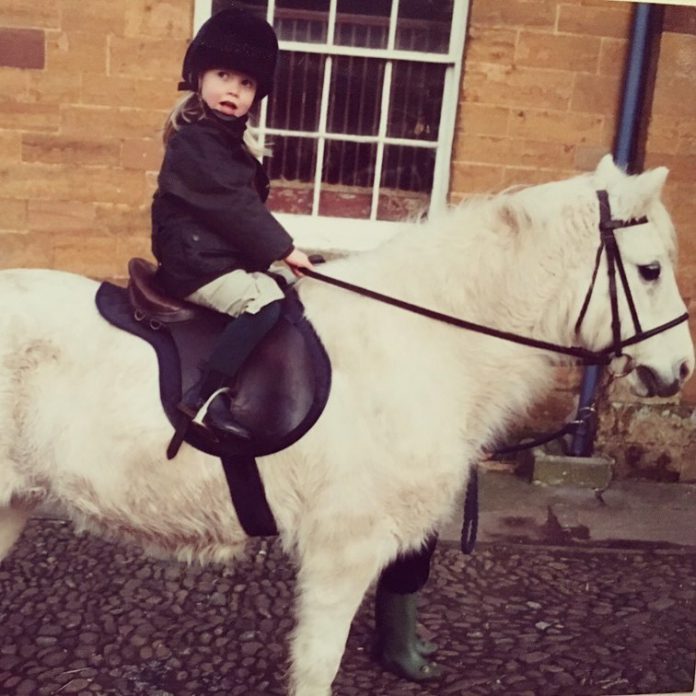 PRINCESS Dianas niece, Lady Kitty Spencer, has shared a photo of herself as a young girl and royal fans are saying she looks identical to Princess Charlotte.

Lady Kitty, 28, posted the sweet shot of her horse riding on her Instagram page, with the caption Channelling my inner jockey since 1992.

In the undated shot, Lady Kitty can be seen sticking her tongue out as she wears a full riding outfit, including jodhpurs, riding boots and a riding helmet.

And followers were quick to point out that the London-based model looks remarkably similar to four-year-old Princess Charlotte, thanks to their cheeky expressions.

One wrote: Wow Charlotte looks a lot like you.

Princess Charlotte also likes to stick out her tongue and has done so in public on a number of occasions, including at a regatta this summer.

Princess Charlotte often likes to stick out her tongue, like Lady Kitty did, and they both have cheeky expressions

Kitty is the daughter of the former British model, Victoria Aitken, and nobleman, Charles Spencer, the younger brother of Princess Diana

And one commented: Gosh you look like Princess Charlotte here.

Its not the first time the pair has been compared, with fans saying a throwback school shot posted by Lady Kitty looked almost identical to the shot released by Kensington Palace for Charlotte’s first day of nursery.

Kitty is the daughter of the former British model, Victoria Aitken, and nobleman, Charles Spencer, the younger brother of Princess Diana.

She is close to her cousins Prince Harry, 35, and William, 37 – and was a guest at both their Royal weddings.

Kitty spent most of her childhood in South Africa as part of her fathers bid to keep her out of the spotlight following the death of her aunt in 1997.

She studied Art History in Italy before returning to London to pursue a career in modelling and made her debut in 2017 with Dolce & Gabbana.

Kitty stunned onlookers at the Royal Weddingwith comparisons to her aunt, Princess Diana.

Kitty first hit the headlines in 2016 when confessed sheadmires the homeless because they have a focusto their lives that she lacks.

Despite being part of the Spencer dynasty, worth 100million, the glamorous socialite says she struggles with having no purpose in life.

We shared inside Lady Kitty Spencers VERY lavish summer as she jets from the Hamptons to Capri.

Meanwhile Princess Dianas brother plans to leave his Althorp estate to his SON instead of eldest child Kitty.

Worst high street Yorkshire puddings sold by Morrisons – based in West Yorkshire, Which?...

Jeremy Corbyn to stay as leader until APRIL and supporters have to pay...

Rishi Sunak and French President Macron set to unite in a bid to tackle...

Did Bobby shoot Mercedes in Hollyoaks? Convinced fans are flooding Twitter with reasons why...