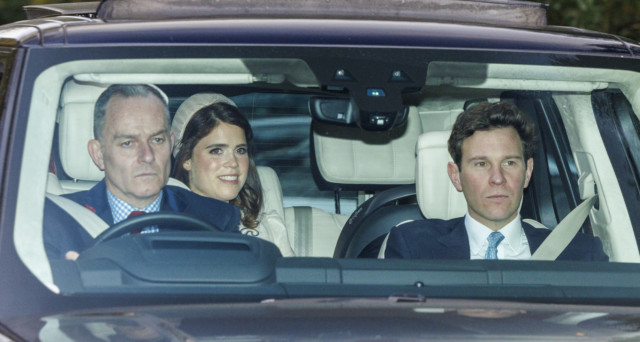 PRINCESS Eugenie has arrived at the joint christening of her and Zara Tindall’s sons.

The princess was spotted wearing a classy beige headband that matched her outfit as she arrived by car with husband Jack Brooksbank.

The Queen previously said she was determined to attended the joint ceremony for the first-born sons of Princess Eugenie and Zara Tindall – although it’s not clear if she is in attendance today.

She told courtiers she was set on witnessing the baptism for Zara and Mike Tindall’s son, Lucas Phillip, and Eugenie’s son August.

She has been recovering from a sprained back that forced her to miss last week’s Remembrance Sunday service.

She was recently advised to step back from official duties by medics after an overnight stay in hospital.

But the Queen was back to her normal duties when she met with General Sir Nick Carter, the Chief of the Defence Staff, at Windsor Castle last week.

Beaming Eugenie and a happy-looking Jack were some of the first to arrive to the ceremony, held at at All Saints Chapel in Great Windsor Park, Berks.

The unusual joint ceremony could be the first of its kind for the royal household.

Commentator Penny Junor said: “I’ve never heard of two royal babies being christened together like this.”

She added: “The Queen is very spiritual, a christening is a very important occasion for the head of the Church of England and being there will be of great importance to her.

“She’s very fond of Zara and Mike, and Eugenie too.”

Princess Eugenie and husband Jack Brooksbank’s son August was born in February and was meant to be christened in July before the event was cancelled due to Covid.

He will be baptised alongside Lucas Philip, the son of Mike and Zara Tindall, born in March.

Fresh holy water from Prince Charles’s trip to Jordan is set to be used during the service.

Charles is said to be bringing back around a dozen bottles from the River Jordan, where Jesus was baptised, to use for future royal baptisms.

The ceremony is being led by Canon Martin Poll, who is chaplain to Great Windsor Park.

It is taking place at the private Grade-II listed church which forms part of the Royal Lodge house — the Queen Mother’s former home currently occupied by Prince Andrew and ex-wife Fergie. The couple arrived in a chauffer-driven Land Rover Zara and Mike Tindall’s son August will also be christened EastEnders reunion as Jake Wood and Adam Woodyatt catch up on break from BBC...