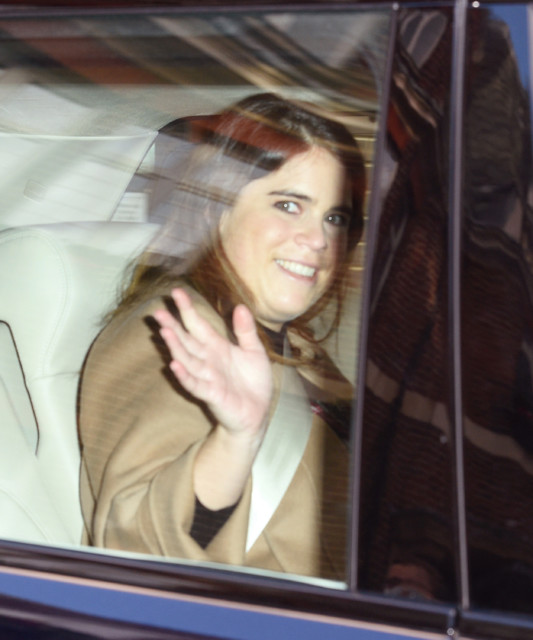 BEAMING Princess Eugenie waved to crowds as she left the hospital today with her new baby boy and husband Jack Brooksbank.

The Queen’s granddaughter welcomed her son, who weighed 8lbs 1oz, on Tuesday, February 9 at 8.55am.

Follow our Princess Eugenie live blog for the very latest news and updates on the new royal baby…. Today was the first time the Princess has been seen in public since the birth of her baby boy.

The first-time mum was glowing as she was driven away from The Portland Hospital while sitting in the back of the car with her new arrival.

The new royal baby – Eugenie and Mr Brooksbank’s first child – is the Queen and the Duke of Edinburgh’s ninth great-grandchild.

He arrived at The Portland Hospital in London, the same place where Meghan Markle had baby Archie in May 2019.

It is also the hospital where Eugenie herself was born in 1990.

Buckingham Palace said Jack was at his wife’s side for the birth.

The Queen, the Duke of Edinburgh, the Duke of York, Sarah, Duchess of York, and Mr and Mrs George Brooksbank “have been informed” and are “delighted with the news,” a statement from the Palace said this afternoon.

It read: “This is Princess Eugenie and Jack Brooksbank’s first child, The Duke of York and Sarah, Duchess of York’s first grandchild, and the ninth great-grandchild for The Queen and The Duke of Edinburgh.

“Her Royal Highness and her child are both doing well.”

Congratulating the couple on their new arrival, Prince Charles and his wife Camilla, the Duchess of Cornwall, wrote on Twitter: “Congratulations to Her Royal Highness Princess Eugenie and Jack Brooksbank on the birth of their son.”

Buckingham Palace announced the arrival of the Royal baby The Duke and Duchess of York, Prince Andrew and Sarah Ferguson, stand with Princess Eugenie after her birth at The Portland Hospital in 1990

It means Eugenie’s delighted parents, the Duke of York and ex-wife Sarah, Duchess of York, have become grandparents for the first time.

The baby is 11th in line to the throne, and means the Queen and Philip’s youngest son the Earl of Wessex, who was third in line when he was born in 1964, has moved down to 12th place in the line of succession.

It comes after Eugenie and Jack spent lockdown at Fergie and Prince Andrew’s home on the Queen’s Windsor estate, but have recently spent time at Prince Harry and Meghan Markle’s former home, Frogmore cottage.

The couple moved into the five-bedroom home in Windsor in November after a direct arrangement with the Sussexes.

Harry and Meghan said they were “delighted” to “open up their home” to the couple, but after only six weeks living there, Eugenie and Jack were said to have packed up their belongings and moved back to Kensington Palace.

One insider said at the time: “It is empty again.

“Why does no one want to live in Frogmore Cottage? What is wrong with the place?”

Eugenie and Jack had been living at Ivy Cottage at Kensington Palace before they relocated to Frogmore Cottage.

The new mum, who is a director at Mayfair art gallery Hausery& Wirth, is currently on maternity leave.

She married wine merchant Jack, 34, in October 2018 at St George’s Chapel, in the grounds of Windsor Castle – just months after her cousin Prince Harry and wife Meghan.

They met in Swiss skiing resort Verbier in 2010, and in a joint interview on The One Show two years ago revealed Jack proposed while on holiday in Nicaragua. The Duchess of York pictured leaving the Portland Hospital with Eugenie

Did you miss our previous article…
https://www.hellofaread.com/royal/nick-kyrgios-confidently-claims-he-would-get-a-few-subscribers-on-onlyfans-in-hilarious-variant-of-guess-who-board-game/

The Queen died ‘with Charles and Anne at her bedside’ as other royals rushed...

Jewish MPs threaten to quit & Jewish groups dismayed after Jeremy Corbyn BACK in...