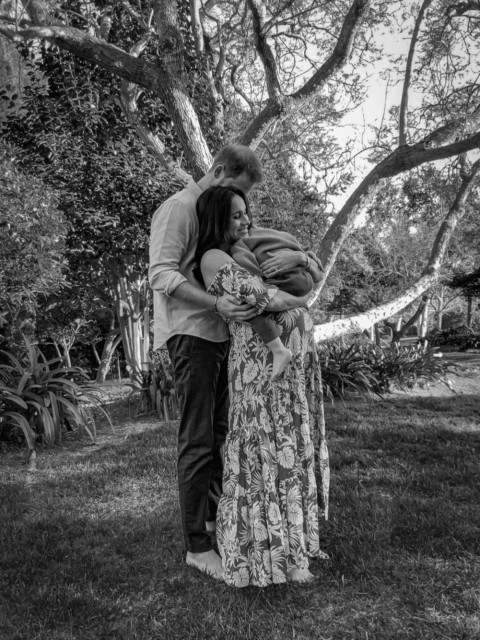 Meghan and Harry said in a statement: “She is more than we could have ever imagined.”

And they may be even happier to discover their daughter is going to be the “first royal rock chick” when she grows up – according to celebrity psychic Sally Morgan.

The fortune-teller – who claims to have worked with the tragic Princess Diana – has exclusively spoken to HOAR about what’s to come for the eighth in line to the throne.

And, sadly, despite many believing Harry and Meghan’s choice of name was an olive branch to the royal family, it seems the rift isn’t going to be healed any time soon.

Before he became a doting husband to Meghan and father to Archie and Lili, Harry was known as “the rebel child” – often photographed out drinking, and was even once photographed playing strip billiards in Las Vegas.

And psychic Sally believes Lili will take after her father, in that sense. Harry was a royal rebel when he was younger “She’s going to have different freedoms to her royal cousins over here,” she told us. “So there’ll be a bit of rebel in her, which will happen in her late teens.”

Sally even claims that we may see our first royal rocker, as Meghan and Harry look to encourage Lili’s musical passions.

She added: “We could even see the first royal rock chick!

“I think she’s going to be really into music, which will be encouraged by Meghan and Harry, and could play the guitar, maybe even the electric guitar.”

Lili is going to look very much like Harry’s late mother, Princess Diana, and her family, according to Sally.

“She is going to be more like her father and the Spencers than Archie,” Sally said. “Even though Archie has his father’s colouring, Lilibet is going to look more like that side.” She’ll also have her honest and open personality

Her personality will be very much like Diana’s too, according to Sally.

She explained: “She’s going to be full of personality and incredibly bubbly.

“She’s going to be very honest and very open; an open book.

“There will be no secrets. She’ll be who she is.” For this reason, Sally says, Harry and Lili’s bond will be very strong.

She added: “I think Harry and her will have a bond that will be incredible.

“I think Megan is going to have the really strong bond with Archie and, for Harry, his daughter will be everything to him, because I think that he will see the Spencer in her and of course, his mother was a Spencer.”

It won’t heal the rift

Harry and Meghan named their daughter Lilibet after Her Majesty, as she shares the family nickname. Harry has a very close relationship with his grandmother, the Queen

And royal experts have claimed the name choice may be an olive branch to the Royal Family after recent controversies.

However, Sally doesn’t believe this to be true.

She explained: “They wanted to honour the Queen,  because he loves his grandmother and he is one of the closest grandchildren.

“He also wanted his mother respected.

“I think many would love to see it as an olive branch, but there is such a huge chasm at the moment and I think it will be many years before the rift is healed.” Sally also notes how “mortified” Prince Charles was by Meghan and Harry’s claims about the royal family in their interview with Oprah Winfrey – which is why the rift won’t be healed any time soon.

She said: “Both Megan and Harry are now supporting wonderful mental health charities, which means they’ve got to practice what they’re preaching, and continue to be open and honest, and talk about mental health issues.

“Prince Charles is mortified, as he is old school, and believes in the phrase, ‘Don’t complain and don’t explain’.”

While it would be lovely to think of Meghan and Harry having a third child, Sally believes the couple will stop now they’ve had two.

She also says the pair are “stronger than ever” and will be together forever.

“They’re going to have ups and downs like any couple, but they’re together forever,” she said. “He has completely changed his life for her.

“But they won’t have any more children now.”

Boris Johnson says MPs should NOT get a £3,300 pay rise during Covid crisis

Premier League chiefs will decide whether to cancel this weekend’s fixtures following death of...

Strictly finalist Maisie Smith could earn millions in two years – if she quits...