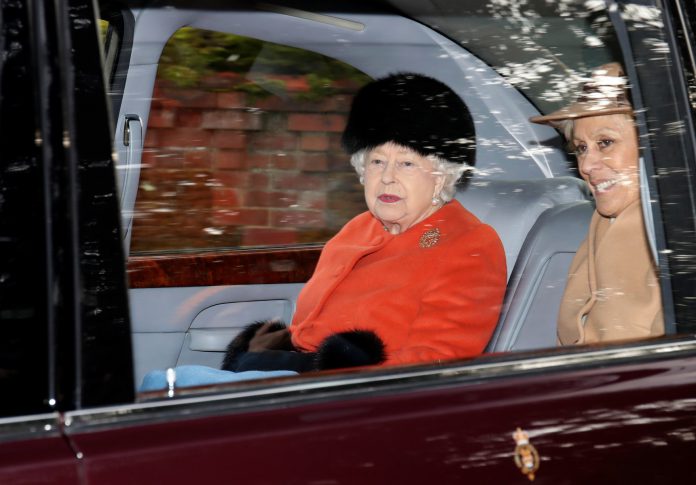 The Queen, 93, was shining as she entered the church for morning service donning a bright orange jacket just days after cancelling an appearance because she had a cold.

Her Majesty, 93, arriving at the church in Sandringham this morning

She was joined by Princess Anne, 69, who walked a small group of esteemed guests to the service while the Queen was riding in a chauffeur-driven vehicle.

Her Majesty wrapped up warm in a bright orange jacket and a furry black hat.

Her dazzling appearance comes just days after the 93-year-old pulled out of an annual visit to the branch of the Women’s Institute in Norfolk because she was “not feeling up to it.”

Her Majesty cancelled her trip to the meeting in Norfolk at West Newton village hall with just 30 minutes notice.

Despite feeling under the weather days prior, the Queen was smiling this morning as she sat in the back of the driven car alongside opera singer Dame Kiri Jeanette Claire Te Kanawa.

Along with her fur hat, Her Majesty donned matching gloves on the crisp January morning.

The Princess Royal was seen wearing a smart navy coat and light blue scarf with a feathered hat for the service.

The Queen’s cheery appearance this morning comes after a tumultuous few weeks for the Royal Family which saw Prince Harry and Meghan Markle quit as royals.

Harry sat down with his grandmother to thrash out details of the so-called Megxit – with it decided the couple would pay back the 2.4m of taxpayer money spent on refurbishing Frogmore Cottage.

They will also live in Canada part-time.

Announcing the decision, the Queen said the pair, and their eight-month-old son Archie, would “always be much loved members” of her family.

She said: “I recognise the challenges they have experienced as a result of intense scrutiny over the last two years and support their wish for a more independent life.

“I want to thank them for all their dedicated work across this country, the Commonwealth and beyond, and am particularly proud of how Meghan has so quickly become one of the family.

“It is my whole familys hope that todays agreement allows them to start building a happy and peaceful new life.”

It came after Prince Andrew was forced to step down from public duties last year after his disastrous Newsnight interview in which he failed to show empathy to the victims of his paedophile pal Jeffrey Epstein.

Emmerdale spoilers: Luke Posner agrees to go on a date with Amy Wyatt after...