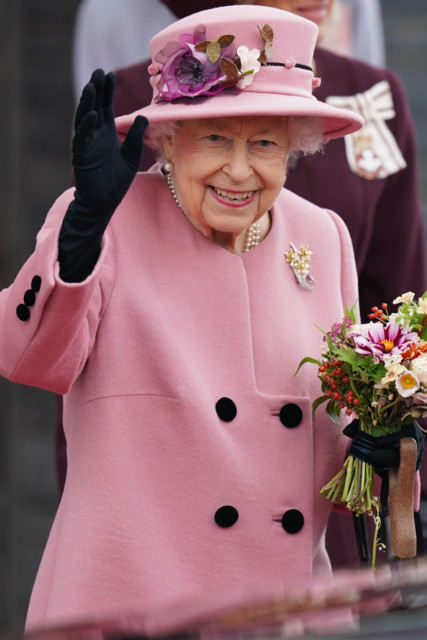 THE Queen wants to return to work this WEEK after a surprise hospital stay saw her miss a scheduled Northern Ireland trip.

The monarch, 95, seems to be bouncing back – defying reports that she was “knackered” after taking on a punishing 19 jobs in as many days.

The Queen has plans to continue with her schedule, says a new reportThe monarch carried out 19 jobs in as many days, including attending British Champions Day, Ascot, Berkshire, on October 16

An unnamed royal source said the Queen was keen to continue her official duties this week, reported the Mail Online.

“Her private office will constantly look at her diary and tweak it as and when is necessary,” they added.

The report comes hours after a source told The Times: “She is knackered.”

She spent the night in hospital for tests last week after cancelling official duties.

But the Queen returned to Windsor Castle in good spirits on Friday after spending a night at the private King Edward VII’s Hospital in London for “preliminary investigations” last Wednesday.

The monarch was understood to be back at her desk by Friday afternoon, undertaking light duties.

Since returning from her summer break at Balmoral this month, Her Majesty has been whizzing around the country, undertaking 19 engagements.

These included planting a tree at Balmoral, travelling 100 miles to Edinburgh, meeting members of the Canadian Army and speaking with the Japanese and EU ambassadors.

Royal sources said the monarch’s private schedule has also been packed with “a constant flow of lunches and dinners with family and friends, because the Queen does not want to dine alone”.

A courtier reportedly admitted: “It has been too much.”

The Times report also said palace aides might “discreetly keep an eye” on Her Majesty’s late TV viewing habits as she is reportedly a devoted fan of BBC drama Line of Duty.

Last month, she stayed up till after 11pm to watch British tennis sensation Emma Raducanu win the US Open.

Royal historian Hugo Vickers said: “The problem is that the Queen does not want to disappoint people.

“She can say no to people, but by and large she doesn’t. What you’ve got to do is pace her.”

The Queen underwent hospital tests after she cancelled a scheduled trip to mark 100 years since the creation of Northern Ireland.

The palace said she had “reluctantly” accepted medical advice to rest for a few days. The matter was not related to COVID-19.

Royal expert Robert Hardman told the BBC: “She hates people making a fuss of her in general, but particularly to do with health.”

She was also forced to miss church at the weekend as she rested after her health scare.

The deeply religious sovereign, who rarely fails to attend, had been due at All Saints Chapel in Windsor.

Palace insiders said Her Majesty wants to be at her best to greet world leaders at the COP26 summit in Glasgow next Monday.

Royal author Angela Levin hailed the revelation, saying: “I am delighted she did not go to church because she is perhaps ­listening and agreeing to temporarily step back.

“Going to church on a Sunday sounds just a small event but it is a very big thing for the Queen and for any woman of her age.”

Sir Edward Young,  the Queen’s private secretary, is facing calls to “be ruthless” and purge the Monarch’s diary.

Officials were said to be drawing up a list of “core” functions and events that the Queen would prioritise, reported the Mail on Sunday.

Her attendance at the UN climate change summit in Glasgow in November still remains in the diary – but a final decision will not be made until later this week.

Only days ago, she was seen using a walking stick at a Westminster Abbey service marking the centenary of the Royal British Legion.

Though she had used a cane in 2003, it was after she underwent knee surgery. Love Island Australia’s Grant had secret girlfriend the entire time – and went back...

Danny Dyer enjoys reunion with his EastEnders family as he prepares to leave BBC...