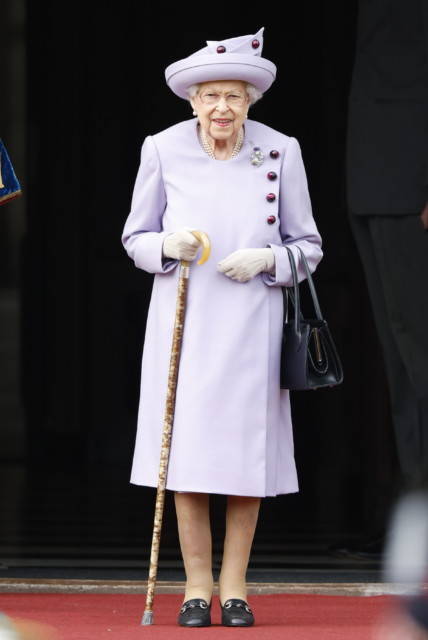 THE Queen beamed in lilac today as she joined Armed Forces for the Act of Loyalty Parade in Edinburgh.

Her Majesty, 96, will be given a royal salute as she arrives for the traditional service in the Palace of Holyroodhouse gardens, Scotland, this morning.

The monarch has cut back on the number of engagements she carries out since experiencing episodic mobility problems.

But she appears in fine spirits this week and was filmed walking unaided to catch the Royal Train for her Scottish stay on Sunday.

Today’s event will see Her Majesty’s Armed Forces in Scotland conduct a Parade and Presentation of the Key for Edinburgh Castle.

The army, navy and air force will all be represented, with Lord Lyon King of Arms presenting a senior representative from each to the Queen. Is that you Ma’am?

Glastonbury moment goes viral as the ‘queen’ is ‘spotted’ in crowd

Three cadets, also representing each Service, will parade the key to Edinburgh Castle across the Holyrood gardens.

The Major General Alastair Bruce of Crionaich, Governor of Edinburgh Castle, will then address the Queen.

Her Majesty is expected to respond: “I return this key to the safekeeping of My Governor of Edinburgh Castle, in gratitude for the symbolic Act of Loyalty of Our Armed Forces, confident of your faithful allegiance to your oath.”

The key will then be returned to the Great Hall after the parade.

The Queen looked relaxed at the start of the Royal Family’s Holyrood Week yesterday, showing no sign of the discomfort that has blighted her for nine months.

Clutching a bouquet, she smiled happily at the Ceremony of the Keys, at which she is symbolically offered the city’s keys by the Lord Provost.

Her Maj, who wore the Royal Regiment of Scotland badge on her powder blue silk dress, received them from Lord Provost Robert Aldridge.

She was joined by her youngest son, Prince Edward, 58, and his wife, Sophie, 57, in what was her first public appearance since her Platinum Jubilee long weekend.

Just the night before, the monarch was spotted boarding the train at Windsor and Eton Riverside Station with no help from aides. Local cricketer Chris Dixon, 24, briefly filmed the Queen on his mobile at 9.50pm.

The footage shows Her Maj walking comfortably with her stick in her right hand and, in her left, the black handbag seen in her Paddington Bear jubilee video. The Queen arrived in Edinburgh for Holyrood week yesterday Her Majesty beamed as she held her walking stick

Im A Celebritys sexiest shower scenes ever from Myleene Klass and Katie Price to...

Emmerdale fans seriously distracted during Leanna Cavanagh’s funeral – but can you spot why?

Prince Andrew slammed as ‘absolute fool’ as ‘sale of £17M chalet is frozen until...