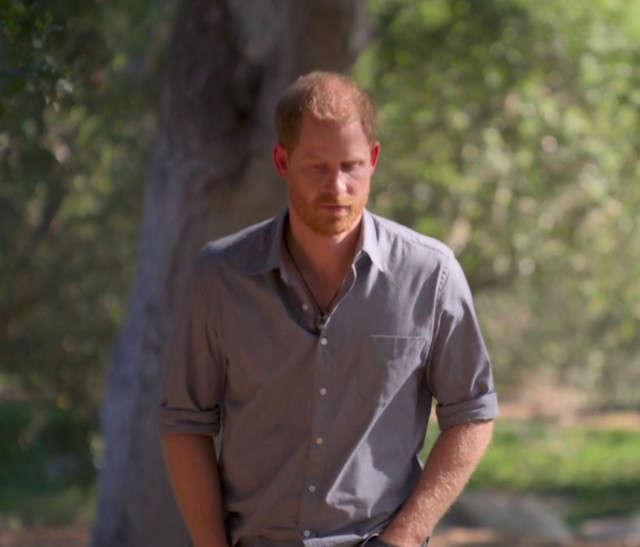 THE Royal Family will be “dismayed” by Prince Harry’s latest broadside on his “nightmare” life – and William and Charles are ‘”tearing out their hair”, an expert says.

In a new documentary, the Duke claimed Charles left him to “suffer” amid “total neglect” for his mental health – while Meghan wept into her pillow after she was ‘smeared’ by The Firm.

Prince Harry’s latest interview on his family will cause ‘dismay’, a royal expert says Phil Dampier said chances of a reconciliation are fading

Doc The Me You Can’t See comes just ten-and-a-half weeks after Harry and Meghan’s Oprah interview aired – but features a new slew of complaints at the royals.

And expert Phil Dampier said chances of a reconciliation for the family are fading.

“The royals will be dismayed and Charles and William will be tearing out what’s left of their hair,” he said.

“It just seems to be another day and another whinge.

“We need to be respectful of Harry’s mental health, of course, but you do wonder – when he is going to stop?

“How much longer he can do this for?”

The new claims will put an increasing strain on the family, Mr Dampier said – while the likelihood Harry will return to the UK this summer for the unveiling of a statue dedicated to his late mother is looking increasingly remote. During his latest interview, Harry was particularly critical of his father “I have grave doubts about whether Harry will come back,” he said.

Elsewhere, royal commentator Richard Fitzwilliams said the Royal Family face huge difficulties in how to move forward – particularly after the Queen requested that personal problems were dealt with out of the public gaze.

“There is for the Royal Family a very, very real problem about the way the Sussexes are addressing their unhappiness,” Mr Fitzwilliams said.

“The Queen urged that the issues be dealt with privately as a family. Meghan and Harry don’t seem to be heeding that at all.”

Harry opened up about his struggles with his mental wellbeing and the trauma that haunts him after the death of Princess Diana in the new doc.

And he discussed his wife’s mental health as well as his own – and said Meghan didn’t give into her suicidal thoughts because of how “unfair” it would have been to him after his mother died. And he alleged Meghan was ‘smeared’ by The Firm ahead of the Oprah interview, which aired in March He singled out Charles for particular condemnation – saying his father did little to help him through his struggles.

He said he was never given the space or time to mourn Diana’s death – and eventually turned to drinking and drugs to numb his lingering pain.

And he revealed he decided to get therapy after he “acted like a 12-year-old” during a huge row with Meghan – and feared he could lose her.

Piers Morgan – one of Meghan and Harry’s fiercest critics – has already shared his opinion on the programme.

He tweeted: “Oh FFS. Is there no end to Prince Privacy’s victimhood tour?

Constantly abusing his family, knowing they can’t respond, is so pathetic & cowardly. Man up, Harry – and shut up.”

When a follower accused Piers of lacking empathy, he hit back: “What ’empathy’ is Harry showing his family as he constantly trashes them in public?

“It’s grotesquely unfair (they can’t answer back) outrageously hypocritical, and he’s making millions from doing it.”

Just HALF of coronavirus tests being used – as ministers STILL say 100k will...

Labour Leadership: two thirds havent heard of ANY of the contenders to replace Jeremy...

Queen welcomes her new Lord Chamberlain as she carries out second public engagement after...

Virgin Media charged me for £116 broadband and threatened debt collectors – even though...