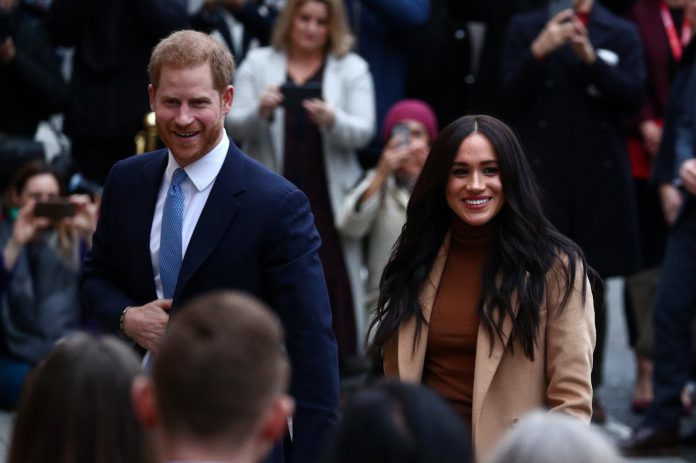 THE Queen, Prince Charles and Prince William reportedly found out Harry and Meghan are quitting as senior royals after hearing the news break on TV.

A bombshell statement was released this evening, apparently without the knowledge of other members of the family.

The Queen, Prince Charles and Prince William found out about the announcement as it broke on the TV, it has been reported

The Daily Mail reports the announcement took them by surprise as they saw it for the first time on the television – leaving their own aides stunned.

And one source revealed the pair “plotted” their next move while on a six-week break in Canada.

They said: “The level of deceit has been staggering and everyone from the top of the royal household to the bottom feels like they have been stabbed in the back.

Its a masterclass in wanting to have your cake and eat it.

“Even their own staff cautioned against them making this public until they actually sat down and discussed it with the family properly.

“But they are in this weird bubble and have this strange siege mentality. They feel like its them against the world and are painting a very unfair picture of how this is a family that supposedly doesnt understand or support them, which is complete and utter rubbish.

Another source said: “The family is perfectly willing to help them but this was a discussion better had discreetly and quietly. Why on earth they have put it out in the public domain is a decision only they can justify.”

Their own UK-based press team were unawares of the new website, independent of the Royal Family, being prepped to launch, it has been said.

The Queen was left “disappointed” by the unexpected announcement, the BBC reports.

And Buckingham Palace admitted discussions with the couple will be “complicated” as they “carve out” their new roles away from the Royal Family.

The pair posted on Instagram they plan to “step back” from royal duties and split their time between Britain and North America – with Canada expected to be their second home.

The couple say they will be “financially independent” in their new lives, but will still support the Queen.

The Duke, 34, and Duchess, 38, said in their surprise statement this evening: After many months of reflection and internal discussions, we have chosen to make a transition this year in starting to carve out a progressive new role within this institution.

“We intend to step back as senior members of the Royal Family and work to become financially independent, while continuing to fully support Her Majesty The Queen.

“It is with your encouragement, particularly over the last few years, that we feel prepared to make this adjustment.

“We now plan to balance our time between the United Kingdom and North America, continuing to honour our duty to The Queen, the Commonwealth, and our patronages.

“This geographic balance will enable us to raise our son with an appreciation for the royal tradition into which he was born, while also providing our family with the space to focus on the next chapter, including the launch of our new charitable entity.

“We look forward to sharing the full details of this exciting next step in due course, as we continue to collaborate with Her Majesty The Queen, The Prince of Wales, The Duke of Cambridge and all relevant parties. Until then, please accept our deepest thanks for your continued support.

It comes after HOAR revealed they were due to discuss plans to move abroad, and Meghan today visited The National’s Dorfman Theatre in London.

Friends of the couple in Canada and the US are supportive of the move, which they say comes after the couple have been sidelined by the monarchy.

Pals argued it has become clear to the couple that the monarchy is moving towards a future focused on Prince Charles and Prince William.

One said: They are back to work. They have nothing to hide and have got so much good work to do.

“But it has been made very clear by the institution that the Sussexes are not central to the future plan.”

A Buckingham Palace spokeswoman this evening said discussions on their decision to step back from the royal family were at an early stage, adding: We understand their desire to take a different approach, but these are complicated issues that will take time to work through.

Yesterday, as they returned to duties, the smiling couple held hands as they greeted well-wishers and met staff at Canada House.

They laughed and joked around, visibly relaxed after their break at a rented $14.1million home in Vancouver Island.

During their time off, the couple missed the Queen’s traditional pre-Christmas lunch at Buckingham Palace and the gathering of royals at Sandringham on Christmas Day.

They posteda Christmas card with an unseen picture of growing Archie online while on their break.

Canada has always held a special place for the pair – it was where they secretly dated for five months before revealing their relationship.

In March, they attended a Commonwealth Day event at Canada House celebrating Canadian culture with expats from the country in the UK.

And Harry held his Invictus Games for wounded soldiers in the Canadian city of Toronto in 2017, while the couple made their first public appearance watching a wheelchair tennis game.

In a growing sign of the importance of the country to the couple, their first official duty on their return to work was a visit to Canada House today to meet the High Commissioner Janice Charette.

Buckingham Palace said the Sussexes hoped to thank them for the warm Canadian hospitality and support they received during their recent stay in Canada.

The couple had intended to move to South Africa for up to six months a year. But that plan was scuppered for logistical reasons.

Matt Hancock lives up to reputation by visiting stud farm

Rod Stewart reveals his brother Don died days before the Queen as he says...

What is the Queen’s last name and why do the Royal Family not use...

Fallon Sherrock loses Grand Slam of Darts quarter-final to Peter Wright – but is...