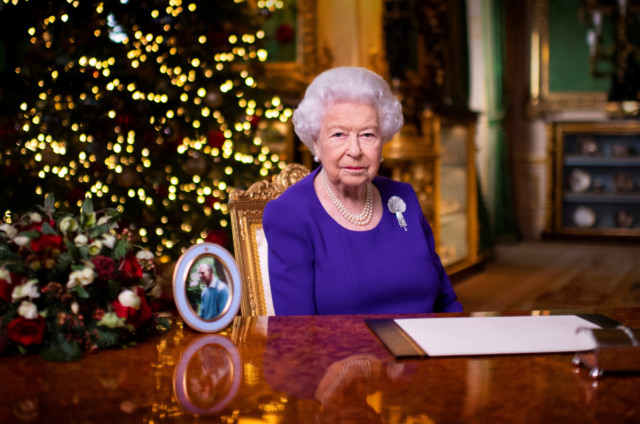 THE Queen has proudly showed a single image of Prince Philip as she made her Christmas Day speech in a sweet tribute to spending nine months on lockdown together.

The Monarch‘s desk featured one framed photograph of her husband of 73 years.

The 94-year-old royal typically has multiple pictures of her children, grandchildren and great-grandchildren on display during her annual Christmas address.

This year, she only had a small oval frame with a photograph of Duke of Edinburgh wearing a blue jumper.

It comes as the Queen spoke of hope and gave a nod to the frontline workers of the pandemic.

Her Majesty is wearing an Angela Kelly purple dress.

She wore The Queen Mother’s brooch shaped as a seashell studded in diamonds with a single round pearl.

It was designed by Lord Courtauld-Thomson and was made in 1919.

The Queen Mother wore this brooch throughout her lifetime, including on her 100th birthday on 4th August 2000.

The Royal Famiy usually spend Christmas together but this year it will just be the Queen and Prince Philip beacuse of Covid-19 restrictions.

They have been living at Windsor Castle with a small number of staff.

It is thought to be the first time the couple have not spent Christmas at their Sandringham home since the mid-1980s.

The Queen will also forgo her usual church service to avoid crowds.

Last year, eyebrows were raised when the Duke and Duchess of Sussex were left out of the family photos during the Queen’s speech.

The Queen addressed the nation this afternoon paying tribute to the frontline workers in her annual Christmas Day speech.

“Today, our frontline services still shine that lamp for us – supported by the amazing achievements of modern science – and we owe them a debt of gratitude.

“We continue to be inspired by the kindness of strangers and draw comfort that – even on the darkest nights – there is hope in the new dawn.”

The Queen recognised the tough year it has been for many who are not able to celebrate with their loved ones.

She said: “Every year we herald the coming of Christmas by turning on the lights. And light does more than create a festive mood – light brings hope.

“For Christians, Jesus is ‘the light of the world’, but we can’t celebrate his birth today in quite the usual way. People of all faiths have been unable to gather as they would wish for their festivals, such as Passover, Easter, Eid and Vaisakhi. But we need life to go on.

“Last month, fireworks lit up the sky around Windsor, as Hindus, Sikhs and Jains celebrated Diwali, the festival of lights, providing joyous moments of hope and unity – despite social distancing.

“Remarkably, a year that has necessarily kept people apart has, in many ways, brought us closer. Across the Commonwealth, my family and I have been inspired by stories of people volunteering in their communities, helping those in need.

“In the United Kingdom and around the world, people have risen magnificently to the challenges of the year, and I am so proud and moved by this quiet, indomitable spirit. To our young people in particular I say thank you for the part you have played.” In 2019, the Queen had pictures of her family members on her desk The Queen and Prince Philip open cards from their great-grandchildren The royal couple on their wedding day 73 years ago

Thousands of children being taught in ‘super-sized’ classes leaving them struggling to catch up...

Over 200,000 children are trapped in dumping ground schools, report warns

A-Level Results Day: Third of students could miss OUT on first choice for uni...

Keir Starmer to vow Labour will ‘never again’ enter an election without a serious...

Nottingham Tier 3 to be confirmed TODAY & whole county on the brink as...