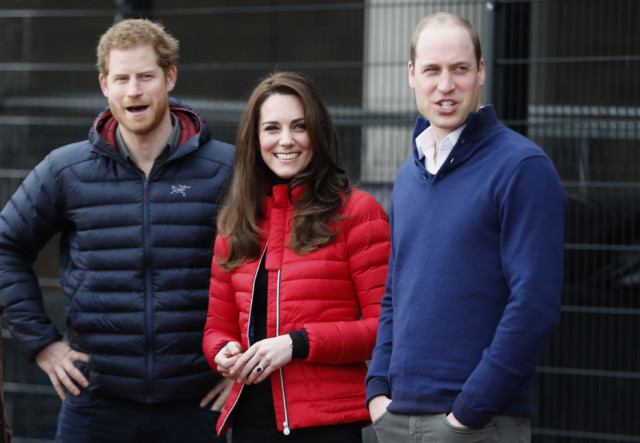 THE Queen has gifted Prince Harry’s Rugby patronage to Kate Middleton – putting her head to head with William.

Kate is the first royal to take on one of Harry’s patronages after he and Meghan Markle quit royal life and moved to California.

The move will put her in direct competition with husband Wills – who is patron of Welsh Rugby Union – during this year’s Six Nations champs this weekend.

Confirming Kate’s appointment today, Kensington Palace said the role closely aligns with her “longstanding passion for sport and the lifelong benefits it can provide”.

Chief Executive of the Rugby Football League Ralph Rimmer said the group are “honoured” and “delighted” to welcome Kate.

Mr Rimmer said in a statement: “We are truly honoured by the appointment of The Duchess of Cambridge as the Rugby Football League’s Royal Patron.

“We are delighted to welcome her as we prepare to host Men’s, Women’s, Wheelchair and Physical Disability Rugby League World Cups in England this autumn.

“Our sport’s history has been built on a commitment to tackling inequalities and we honour that through our focus on having a positive social impact well beyond the pitch.

“We look forward to working with The Duchess in the years to come, and I know all levels of our sport will welcome her to the Rugby League family.”

Chief Executive of the Rugby Football Union Bill Sweeney added: “It is a great honour to welcome The Duchess of Cambridge as our Patron.

“Our aim is to enrich lives, introduce more people to rugby union, develop the sport for future generations and create a successful thriving game across the country.

“As rugby clubs have re-opened across the country, players, officials, and volunteers are celebrating being back in the game together, and we know the support of The Duchess will be greatly valued from our grass roots clubs and fast-growing women and girls’ game, right up to our elite Men’s and Women’s England teams.”

Harry was forced to step down from his job as patron of the RFU last year after he and Meghan Markle quit royal life and moved to California.

The rugby-mad royal – who famously celebrated England’s 2003 World Cup win with the squad in Australia – had been patron at Twickenham since 2016.

He had taken over the role from the Queen, 95, having been her vice president since 2010.

But in February last year, Buckingham Palace released a statement confirming Her Majesty’s decision to relinquish Harry and Meghan of their honorary patronages – including Harry’s links to British sport.

The Palace confirmed the “honorary military appointments and Royal patronages held by the duke and duchess” would be “returned to Her Majesty, before being redistributed among working members of The Royal Family”.

Until now, no member of the Royal Family has been handed one of the Sussexes’ patronages.

It is not yet clear whether she will also take on Harry’s old role as patron of the Rugby Football League, but the Queen may now start to redistribute more of Meghan and Harry’s dormant roles.

For Harry, these include his ex-military affiliations as well as the presidency of the Queen’s Commonwealth Trust and the London Marathon Charitable Trust.

Meghan also had to hand back patronages with the Royal National Theatre and the Association of Commonwealth Universities, as well as her vice presidency of the Queen’s Commonwealth Trust.

Sporty Kate is already royal patron of the All England Lawn Tennis and Croquet Club and has previously cheered on England’s stars at Twickenham.

The team is due to play Wales at Twickenham on February 26, with both William and Kate supporting their respective sides.

The Rugby Football League – established in 1895 – is the national governing body for Rugby League in the UK.

It covers all forms of grassroots and the professional game, including women’s and wheelchair rugby.

Meanwhile, the Rugby Football Union is the national governing body for grassroots and elite rugby union in England.

With 1,900 member clubs is one of the largest sports organisations in the country.

Founded in 1871, it promotes and runs the sport, educates and trains players and officials, and runs the England men’s and women’s elite performance teams. Harry had been patron at Twickenham since 2016 They move will put her in direct competition with husband Wills

Britain can ‘ride out’ the Omicron wave without any new curbs amid record 218,000...

Emmerdale fans spot blunder as they claim Moira was too young to get married...