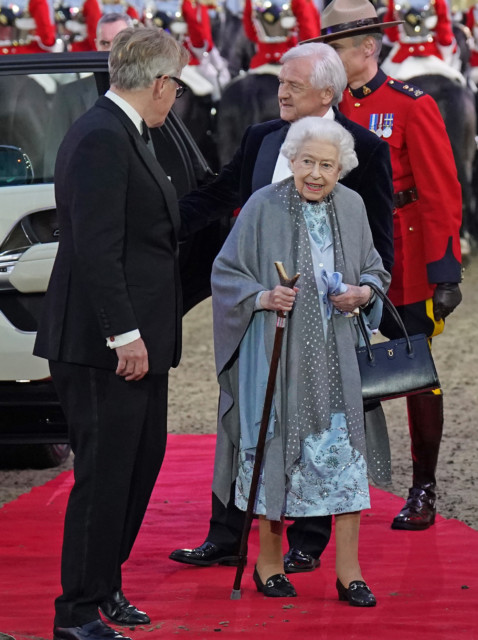 THE Queen was all smiles as Top Gun movie star Tom Cruise got her 70th Jubilee celebrations off to a flying start last night.

Her Majesty, 96, put her health woes behind her as she stepped nimbly and unaided out of a Range Rover on to the red carpet at Windsor. Dame Helen Mirren, who played Her Majesty in 2006 film The Queen, appeared as Elizabeth I

US screen idol Tom, 59, said at the star-studded TV event: “What she has accomplished has been historic.”

Her Majesty raised the nation’s spirits last night as she appeared at what was the first major event to mark her 70th anniversary on the throne, the The Queen’s Platinum Jubilee Celebration on ITV.

She used a walking stick but looked relaxed and at ease and was given a round of applause by the audience.

Top Gun actor Tom Cruise, 59, was among a galaxy of stars who appeared on the extravaganza.

Read more on the Queen Tom was swamped by surprised fans as he walked through Windsor before the show.

He called his invite an “honour and privilege” adding: “I love the history and have great respect for her.”

He said: “She is a person I greatly admire, someone with ­tremendous dignity, I admire her devotion and what she has accomplished has been historic”.

And Alan had earlier joked: “Tom Cruise and I are not a natural pairing, but I’m all for breaking the mould.”

The 2½-hour show was presented by This Morning’s Phillip Schofield and ITV News presenter Julie Etchingham.

Julie had earlier said: “It’s hard to describe but I just think Her Majesty the Queen is the epitome of service.

“To have dedicated her whole life to this role from such a young age — with all the enormous change the country has been through; through all the personal highs and lows she’s encountered — and to have done so with such grace, determination and discretion, is inspiring.

“She has been a constant, reassuring presence in our national life.”

She performed Sing, written by Take That star Gary Barlow and Andrew Lloyd Webber, with 54 children on backing vocals.

They were members of the Commonwealth Youth Choir, representing each of the association’s countries.

Viewers were treated to a spectacular live show with 1,300 performers and 500 horses.

Comic Omid Djalili played a character called The Herald and guided viewers on a “Gallop Through History”.

Equestrian, military and musical performers came from around the world, including Norway, Switzerland, Oman, Azerbaijan, Canada, India and France. She said: “It’s nice to have the opportunity to all come together and show our deep gratitude for all that she’s done for the country and the Commonwealth.” Viewers were treated to a spectacular live show with 1,300 performers and 500 horses The extravaganza attracted a galaxy of stars As did Bridgerton’s Adjoa Andoh From budding models to James Bond junior, can you tell the famous dads of...

Dec Donnellys wife Ali Astall entertains herself with a bike ride while her husband...

Sajid Javid to reward Northern and Midlands seats that voted Tory in his next...