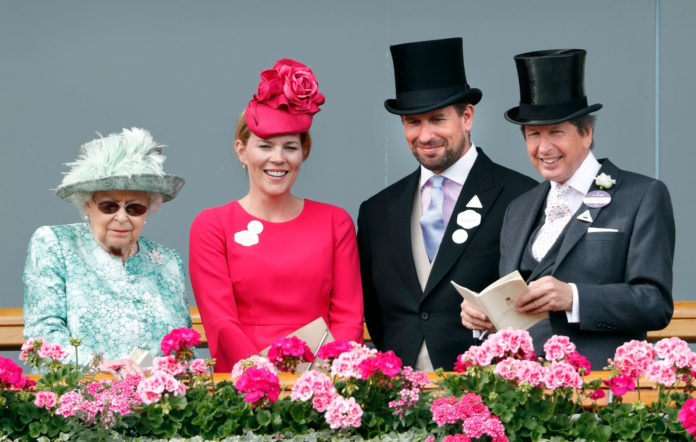 THE Queen urged Peter Phillips and his wife Autumn not to make any “hasty” decisions as their marriage fell apart last summer.

It has been reported the monarch, who is close with her granddaughter-in-law, gave them words of advice ahead of their divorce during a visit to Balmoral.

The monarch, who is close with her granddaughter-in-law, gave them words of advice ahead of their divorce

The Daily Mail reports: “They told the Queen during a private visit to Balmoral late last summer.

“During their stay, Autumn travelled to church with the Queen, who has grown very fond of her spirited granddaughter-in-law.

“She urged them not to make a hasty decision.”

Adding: “For a long time, Peter, 42, filled a special role in the Queen’s family.

“He kept an eye on his cousins Prince William and Prince Harry, who looked up to him and was their constant companion in the dark days immediately after the death of Princess Diana.”

It comes as pals revealed fearsAutumn, a native Canadian,would return to her home country and take the kids with her.

Close friends are suggesting that Megxit Prince Harry and Meghans departure from the UK to Canada could have hastened Autumns shock decision.

But other reports suggest they will remain living close to each other, with one moving to another part of the Gatcombe Park estate in Gloucestershire.

They are currently both living under the same roof in their marital home in a domestic set-up that mirrors Andrew and Fergie.

Sports marketing consultant Peter, 42, and Autumn, 41, who is a management consultant, have two children Savannah, nine and Isla, seven.

Close friends blamed the split on constant business travel forcing them to spend time away from each other which resulted in a drifting apart.

And sources said: “This is a very amicable break-up.

“They remain living in the same house together. The reality is that they have spent so much time away from each other with their various work commitments. They drifted apart.

There is no intention to rush anything but at some point one of them will move out.”

The decision is something they had thought about for some time but they made the decision finally in September and, of course, asked the Queen for permission to separate and made it clear the plan is for them to divorce.

She was upset because shes incredibly close to Peter and adores Autumn. But she respects their decision and the fact they are going to put their young girls first.

It was disastrous timing because the Jeffrey Epstein was exploding and everyone felt this was the last sort of news the Queen needed.

They wed at St George’s Chapel in Windsor Castle in 2008, and decided to split last year.

The revelation comes just two weeks afterPeter sparked international controversy for advertising milk in China while being promoted as a British royal.

The split is the latest problem for the Royal Family after a disastrous year, which some commentators have branded a second Annus Horribilis.

The pair decided to split after 12 years of marriage

Boohoo buys Debenhams website and brand – but stores and staff jobs still at...

Love Island USA is coming to our screens next week from a COVID-secure ‘bubble’...