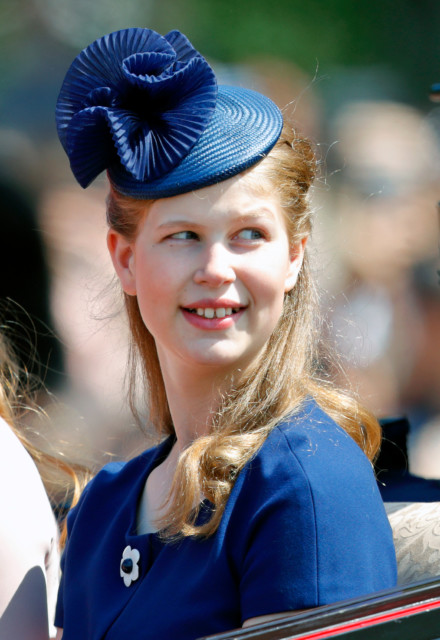 The 17-year-old daughter of Prince Edward and wife Sophie, Countess of Wessex, is said to be “adored” by the 95-year-old monarch.

Lady Louise is said to be the Queen’s favourite grandchild, not William and Harry, claims royal expertRoyal experts say the Queen likes how ‘polite’ Lady Louise is and that they share a love of horses

Royal author Phil Dampier told Fabulous: “Lady Louise is definitely a favourite of the Queen and I can see her having an important role in the royal family in the future.

“Her Majesty sees a lot of Edward and Sophie and their children at Windsor Castle as they live nearby at Bagshot Park.

“The Queen is very close to her mother Sophie and of course there has always been a bond between them because Sophie nearly died giving birth and Louise has had her eye condition to cope with.

“But she has grown into a lovely and intelligent young woman and the Queen adores her.”

Phil said that Her Majesty may even be closer to Lady Louise than she is to William, Harry, Eugenie and Beatrice.

He explained: “In many ways the Queen is closer to Louise and her brother James because they are just family and don’t yet have major roles.

“Harry and Meghan have left of course and William and Kate live in Norfolk much of the time, and are busy with their duties.

“So she sees the Wessex family more in relaxed times.”

The Queen and her late husband Prince Philip, who passed away at the age of 99 on April 9 this year, are so close to Lady Louise, that she was given a special present in Philip’s will.

We previously reported how Philip left his beloved ponies and carriage to his granddaughter as he’d taught her how to do carriage driving before his death.

Royal author Phil added: “The Queen would be delighted that Prince Philip left her his ponies and carriage to carry on the tradition and the Queen loves her family to be interested in anything horsey.”

Prince Philip took up carriage driving in the 1970s after switching from polo.

Lady Louise is said to have emerged as the Queen’s favourite grandchild following a lengthy stay at the monarch’s Scottish retreat, Balmoral, over the summer of 2019.

Louise is 14th in line to the throne, behind her younger brother James, as they were both born before the 2013 Succession to the Crown Act, which officially ended the centuries-old rule that male offspring take precedence over females.

A royal insider previously said: “The Queen loves the fact that Louise and James relish their time at Balmoral, and she has become particularly close to Louise, who seems to have become her favourite grandchild, closely followed by James.”

Ingrid Seward previously told Fabulous Digital that the Queen likes “ordinary people more than she does those that pander to her”.

She previously told Mail Online : “She [Lady Louise] has always been an asset to the family and very polite which the Queen loves.”

Phil continued that we could see Lady Louise take on royal duties as she gets older and play a wider role in the royal family.

He explained: “Louise is highly intelligent and thoughtful, and you get the impression she would want to find an important role for herself and do something special with her life.

“I’m sure she will be encouraged by her parents to forge her own way, but if the Queen needs her to step up and take on some duties then I’m sure she would be up for it.

“Edward and Sophie have said that they want their children to make their own way and not use their titles, but royals are going to be thin on the ground going forward.

“Harry and Meghan have left, Charles Camilla and Anne are in their seventies, so who is going to perform the duties?

“The Queen and Prince Philip had 1500 patronages between them, and although Prince Charles is said to want a slimmed down monarchy, you cannot slim it down so much that no-one can find a royal to open their museum or charity.

“I think it would be great for Sophie to take on more duties – she has more charisma than her husband Edward – and for Louise to be considered in a couple of years.

“It would give fresh blood and energy to the creaking House of Windsor.” Phil Dampier claimed Her Majesty may even be closer to Lady Louise than she is to William, Harry, Eugenie and Beatrice Lady Louise is the daughter of Prince Edward and wife Sophie, Countess of Wessex

We shared how Lady Louise ‘could use princess title when she turns 18 in just a few months’ after Charles and Edward title row.

And Lady Louise Wessex seen driving carriage given to her by Prince Philip in touching tribute to late grandfather.

I’m A Celebrity 2020: Do celebs rehearse Bushtucker Trials before they do them?