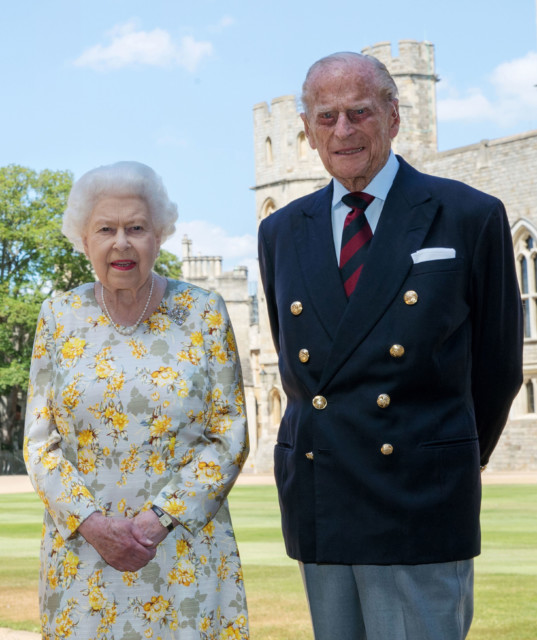 THE QUEEN made an incredibly touching nod to her late husband Prince Philip in her COP26 speech tonight.

Her Majesty told world leaders at the climate crunch talks that the environment was a subject close to her “dear husband’s” heart – who sadly passed away in April.

The Queen said her ‘dear late husband’ Philip cared greatly for the environmentWearing a green dress and butterfly broach, she spoke to the summit via video link, recorded at Windsor Castle

The Queen, 95, paid a touching tribute to her late husband’s decades-long fight against climate change – which she said lives on in Charles and William.

Speaking about Philip’s unwavering commitment, she told the summit: “The impact of the environment on human progress was a subject close to the heart of my dear late husband, Prince Philip, The Duke of Edinburgh.

“I remember well that in 1969, he told an academic gathering:

“’If the world pollution situation is not critical at the moment, it is as certain as anything can be, that the situation will become increasingly intolerable within a very short time … If we fail to cope with this challenge, all the other problems will pale into insignificance.”’

Mentioning the next two people in line to the throne, the Queen told the climate summit that she “couldn’t be more proud” of her son and grandson for their hard work.

Her Majesty said in her gushing COP26 speech: “It is a source of great pride to me that the leading role my husband played in encouraging people to protect our fragile planet, lives on through the work of our eldest son Charles and his eldest son William.

“I could not be more proud of them.”

Prince Harry has a history of speaking out on climate change action – most recently hosting Global Citizens Live in New York.

But his withdrawal from royal life and the fact he has not attended COP26 in Scotland was perhaps the reason his grandmother didn’t mention him in the accolades.

The monarch said that it was fitting the COP26 meet was taking place in Glasgow – which was once the heartland of Britain’s industrial revolution.

And she paid homage to those who have enthusiastically taken on the climate crisis in their own lives – including youngsters.

Her Majesty was unable to attend the climate talks in Glasgow after she cancelled all public engagements on doctors’ orders.

Buckingham Palace announced this week The Queen will only be undertaking “light, desk-based duties” as she gets on the mend.

Addressing the world leaders via video from Windsor Castle, Her Majesty added: “In the coming days, the world has the chance to join in the shared objective of creating a safer, stabler future for our people and for the planet on which we depend.

“None of us underestimates the challenges ahead.

“But history has shown that when nations come together in common cause, there is always room for hope.

“Working side by side, we have the ability to solve the most insurmountable problems and to triumph over the greatest of adversities.”

The non-partisan Queen also urged the leaders to “rise above the politics of the moment” and “achieve true statesmanship” when addressing the climate crisis.

This comes after days of butting heads between France’s Emmanuel Macron and Prime Minister Boris Johnson over Brexit fishing rights.

The 95-year-old monarch ended her speech telling the world leaders that “the time for words has now moved to the time for action.”

She added: “Of course, the benefits of such actions will not be there to enjoy for all of us here today: we none of us will live forever.

“But we are doing this not for ourselves but for our children and our children’s children, and those who will follow in their footsteps.

“And so, I wish you every good fortune in this significant endeavour.”

This comes as the Queen was spotted behind the wheel in Windsor this morning during a two-week break from duties.

The monarch looked chipper and well in a headscarf and dark sunglasses after she cancelled all public engagements on doctors’ orders.

Her appearance comes days after she was told by her private medics to rest after spending a night in hospital for ‘preliminary tests’.

She was later discharged in “good spirits”, and the stay was kept a secret and only confirmed by the Palace when it was revealed by HOAR.

And while she’s still receiving her daily red boxes of Government documents, the royal has decided to rest until mid-November.

The new photo will be doubly reassuring to Brits concerned for her health.

Boris Johnson said over the weekend that Her Majesty was “on very good form”.

The PM, who speaks to the Queen every Wednesday for a weekly update, told Channel 4 News on Saturday: “I spoke to Her Majesty and she’s on very good form.

“She’s just got to follow the advice of her doctors and get some rest and I think that’s the important thing.

“I think the whole country wishes her well.” The Queen was spotted driving in Windsor today

The images will doubtless reassure royal fans concerned for her health

Council tax could rise by up to 5% next April as ministers give green...

Dancing On Ice 2020 couples meet the pro skaters have been paired with...