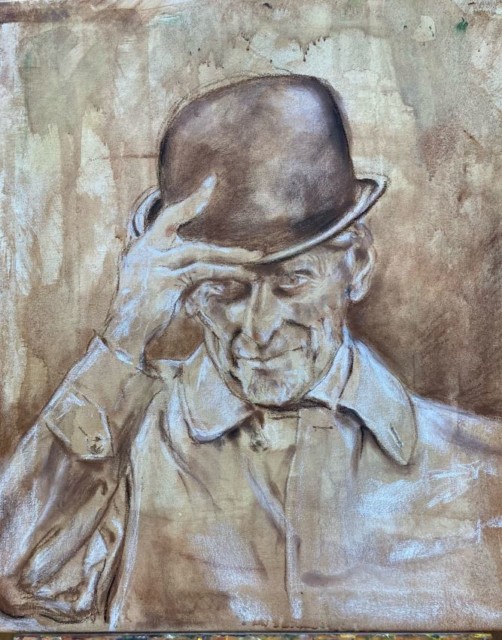 RONNIE Wood says Prince William is presenting one of his paintings of the late Duke Of Edinburgh to the Queen.

Speaking at the unveiling of his latest painting, Abstract Performance, above, Ronnie said he was approached by William after hearing about the artwork.

Ronnie, 74, said: “I did a wonderful painting of the Duke of Edinburgh shortly before he died where he is tipping his hat.

“It is charcoal, brown sepia pastel. I finished it shortly before he died. I was going to show it to him.

“Now I have been asked by Prince William to present the picture to him in the coming weeks and he is going to show the Queen. This is a real honour for me.”

While speaking about the piece, which was inspired by Picasso’s 1925 piece called the Three Dancers, Ronnie also paid tribute to the Stones’ drummer Charlie, who died of cancer last August aged 80. Ronnie continued: “Good old Charlie.

“He gave Steve Jordan our new drummer his blessing and it was a really wonderful heartfelt thing from Charlie.

“He said: ‘I won’t be able to join you just yet but I’m not going to take away any jobs from people. I want everything to carry on. Steve, play for me.’ And he sure did. A new drive and carrying on the Charlie legend wonderfully.”

Ronnie also revealed the group were planning a tour around Europe in the coming months and were putting live music above their hotly anticipated new record.

He said of the album: “It’s coming along slowly. It’s the gaps in between that eat up all the time. It is a matter of getting us all together again. “Everyone is in a different part of the world.

“So instead of putting emphasis on rushing an album, we’re doing the opposite and taking a really long time. And we’re putting live shows first.”

The painting, which Ronnie said was the “third in a trilogy of Picasso stones influence”, is on display at Wood Lane in West London until February 14.

And while the unveiling drew admiration from the crowds gathered around, Ronnie said his bandmates had also given the piece their blessing.

He said: “They have all got used to my paintings now and they all like them. I used to show them my paintings at the beginning and they’d be like, ‘Oh blimey. Not another one.’

“They really like them now. Mick is naked in all of them. The inspiration is Picasso’s three dancers. And I thought why not?” Ronnie spoke at the unveiling of his latest painting, Abstract Performance Katie Price’s daughter Princess and boyfriend Carl leave her stunned as they tell her...