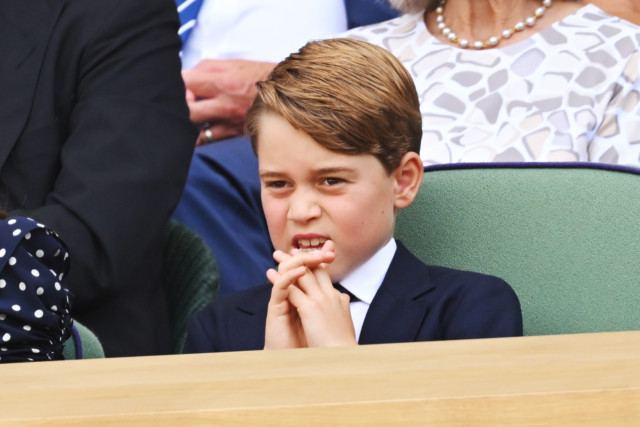 ROYAL fans are all saying the same thing after spotting Prince George’s “reaction” to Nick Kyrgios’ swearing at Wimbledon.

The future king, eight, sent the crowd wild as he took his seat in the royal box with William and Kate at Centre Court for his first ever tennis match.

Prince George looked stressed at his first ever tennis game

The youngster, who looked the part as he donned a posh blue suit, shirt and tie in the blazing sunshine, watching fiery Australian Nick Kyrgios take on Serbia’s cool operator Novak Djokovic.

In the run up to the final, the explosive Kygios, 27, engaged in ferocius arguments with line judges, umpires, opponents, the media and even the crowd.

And today was no different, despite the royal company.

Kyrgios threw an on-court tantrum, losing it at the umpire over a heckler he said “that looks like she has had 700 drinks”.

He even had a meltdown at his own team, screaming at them “is it big enough for you?” in front of shocked onlookers.

The controversial Aussie firebrand ranted and raved and F-bombed his way to defeat – meaning Prince George was treated to some choice language.

The young lad was snapped covering his head with his hands, with many believing it was a reaction to the swearing.

Royal fans rushed to social media to give their two cents on the matter.

One tweeted: “The little Prince George was not impressed with all the swear words from Nick. His expression got me laughing so hard earlier.”

Another adding: “These constant foul-mouthed tirades by Nick Kyrgios at #WimbledonFinal right in front of the Royal Box and young 8-year old Prince George are a disgrace. Hope he gets fined big time.”

A third said: “Without the whinging that was an exciting match. Djokovic balances out the unprofessionalism of Nick in this ‘bromance.’ Hope that drunk woman, and Prince George’s little ears are ok.”

While another fumed: “Kyrgios freaked me out. I had no idea who he was talking to and yelling at during Wimbledon2022 final. Poor Prince George must have been traumatised.”

The couple’s other children, Charlotte, seven, and Louis, four, were not in attendance.

Royal fans will be disappointed not to see the whole family together after their show-stealing appearances at the Jubilee.

Little Louis was a particular hit after chatting to his ‘Gan-Gan’ – the Queen – on the balcony of Buckingham Palace and cheekily putting his hand over his mum’s mouth at the royal pageant.

The youngsters will be spending much more time with their grandmother after a move to Windsor this summer.

It comes after Kate presented Russian-born Elena Rybakina, who is representing Kazakhstan, with the Venus Rosewater Dish when she beat Tunisian Ons Jabeur in the women’s singles final on Saturday.

The moment came not without controversy as the 23-year-old, who was born and raised in Moscow and played under the Russian flag until she switch international allegiance to Kazakhstan in 2018, won the tournament in a year where Russian and Belarussian athletes were banned.

EastEnders fans horrified as Ben Mitchell threatens Tommy Moon after he catches him with...

One in ten Brits under 50 may get long Covid, Matt Hancock reveals

What is the One Young World summit and how is Meghan Markle involved?