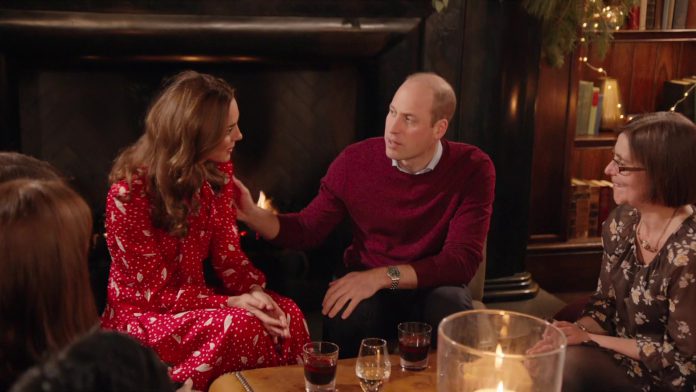 TV VIEWERS have claimed that Kate Middleton shrugged off Prince William when he affectionately touched her shoulder in BBCs A Berry Royal Christmas.

On the festive episode, featuring esteemed cook Mary Berry, fans were distracted by the duchess appearing to snub her husband when he put his hand comfortingly on her back.

The documentary showed Mary accompanying the Duke and Duchess of Cambridge as they visited four royal organisations.

And the seemingly awkward moment has left TV viewers taking to Twitter, with one saying: She moved with a quickness.

Another pointed out: Kate shaking off William’s hand on her shoulder during #ABerryRoyalChristmas.

And one wrote: What just happened here???? Ouch!

On the Christmas show, the royal couple, both 37, hosted a party for staff and volunteers from charities that give up their time over Christmas.

Former Bake Off judge Mary, 84, designed the menu, while the duke and duchess lent a hand with the preparations.

During the event, the couple sat down to chat to some volunteers, and this was when the awkward moment took place.

Many people said they couldnt stop watching the clip, whereas some defended the couple and said it wasnt a moment for public displays of affection.

Why cant people just be content with the fact that she didnt feel a PDA was appropriate at that moment/at that event, it wasnt about them, it was about all the volunteers. I wish people would stop trying to pick holes in their relationship.

I think he tickled her back or shoulder, she did move but there were no dirty looks or even a facial reaction, it was not really long enough of a clip to really tell what was going on, but both seem to be in good humour

One person tweeted: I like the way they interact, its professional. I dont want to see excessive hand holding and back rubbing. Its awkward, like youre intruding on a private moment.

Another said: Why cant people just be content with the fact that she didnt feel a PDA was appropriate at that moment/at that event.

And one social media user reasoned: I think he tickled her back or shoulder. She did move but there were no dirty looks or even a facial reaction.

It was not really long enough of a clip to really tell what was going on, but both seem to be in good humour.

Typically the duke and duchess tend to be more reserved when it comes to being tactile in public, but they have had sweet moments of affection in the past.

The Duke and Duchess of Cambridge paid a visit to Kings Cross in October and Kate was seen placing a loving hand on her husbands arm.

Whatever the reason behind this weeks rebuffing, the BBC show seems to have been a resounding success for the royal parents-of-three, with Kate being hailed a national treasure and future Queen after it aired on Monday.

On the show, Kate also shared that William tried to impress her at university with his cooking.

The Duchess of Cambridge also opened up to Mary on how she tries to make life as down-to-earth as possible for her children.

On the show, she revealed: We grow our own vegetables. Weve got carrots, beans, beetroot – a massive favourite – Louis absolutely loves beetroot.

We shared how the Royal Family shared a recipe of festive cinnamon stars with fans on Instagram.

Meanwhile, a former royal chef has revealed exactly what it is like to work in the kitchens at Buckingham Palace, and the type of foods the Queen wishes to avoid.

We also revealed the hilarious names the Queen’s grandchildren use to address her and the secret signal she uses when she wants to leave a function.

Furious Prince Charles to read Andrew the riot act and strip him of his...