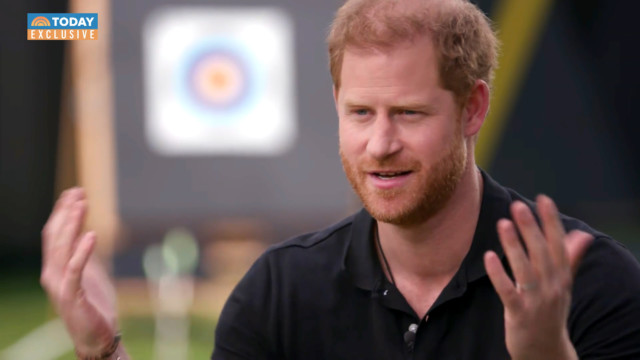 ROYAL staff have slammed Prince Harry over his comments about “protecting” the Queen and said that the Duke needs to “think before opening his mouth.”

Prince Harry sparked a fresh row in the past few days by announcing on US TV that he is “protecting” Her Majesty just days after missing Philip’s memorial service.

The Duke of Sussex claimed on NBC Today he was ensuring Her Majesty has “got the right people around her”.

Palace aides were left reeling by the “breathtaking arrogance” of Harry, who until last week had not seen his gran for more than a year.

In comments beamed around the world, Harry, 37, said he was not sure whether or not he would take up the invitation to attend Her Majesty’s Platinum Jubilee in June — blaming “security issues” and “everything else” for his indecision.

But aides have allegedly slammed Harry – and said that the Queen “doesn’t deserve this.” ONE IS A BARBIE

The Queen is immortalised as a BARBIE doll for Platinum Jubilee GET OFF HIS HORSE

A royal insider told the Mail: “It is the Queen’s birthday and despite a difficult year people are working full steam ahead on making her Platinum Jubilee an event to remember that properly honours such a remarkable woman.

“She just doesn’t deserve this.

“I have no idea what intention he may or may not have had in saying this, but Harry needs to start thinking before he opens his mouth.”

This comes as The Queen showed she’s in fine fettle in a new photo released for her 96th birthday today.

Despite health worries, she posed with two fell ponies last month at Windsor.

She is at Sandringham for her big day.

In the interview, Prince Harry also revealed private details of his and Meghan’s secret “clear the air” conversation with the Queen and Prince Charles at Windsor Castle last Thursday in the interview with presenter Hoda Kotb at his Invictus Games.

It was the first time the Sussexes had seen Her Majesty together in more than two years since they left the UK for a new life in California.

During the interview, and despite missing last month’s thanksgiving service for his grandfather Prince Philip, Harry bragged about his “really special relationship” with Her Majesty, who is 96 today.

He said: “We talk about things that she can’t talk about with anybody else, so that is always a nice peace to her.”

Harry implied criticism of Royal Household staff who looked after the Queen during Covid in what was jokingly dubbed “HMS Bubble”, when he said: “I’m just making sure she’s protected and has got the right people around her.”

He dodged a question on whether or not he misses Prince Charles, 73, and 39-year-old Prince William, adding: “When I leave here, I get back and my focus is on my family who I miss massively.”

Harry risked widening his gulf with William by saying, in a comment about their mum, Diana: “It’s almost as though she’s done her bit with my brother and now she’s very much, like, helping me.”

He also said he wants son Archie, two, and ten-month-old daughter Lilibet to meet the Queen and revealed he has photos of Di at his £11million Montecito mansion. NEIGH IT AIN’T SO

I have to knock down my £50,000 extension because of a nosey neighbour

Speaking about mum Diana, he added: “I feel her presence in almost everything that I do now.

“But definitely more so in the last two years than ever before. Without question. So she’s watching over us.” The regal portrait released for the Queen’s 96th birthday

eFootball gets it in the BACK OF THE NET thanks to footy license grabs...

Voters go to the polls in by-election as Tories battle to hold off Lib...