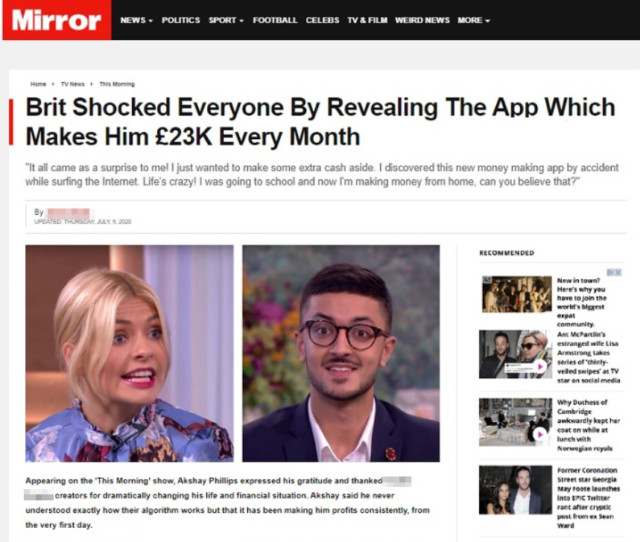 CELEBRITIES and business moguls are being used to trick Brits into clicking phoney ads – and even lure them into dodgy online scams.

Top names like Piers Morgan, Richard Branson and This Morning hosts Holly Willoughby and Phillip Schofield have all been used by scammers for fake online ads.

Some online ads are relatively harmless, using celeb names to attract more clicks on a website.

But cyber experts and UK fraud police have warned HOAR about fake celeb endorsements for Bitcoin schemes – which could see Brits losing huge sums of money.

Often the ads will make bold claims about how celebrities earned a quick buck by following a financial scheme or trick. Sometimes these ads will lead straight to a dodgy Bitcoin site, while other times they’ll lead to a completely unrelated page simply for clicks.

Scammers have even taken to making fake versions of top news sites – including HOAR, the BBC and CNN – to sell online scams.

“Celebrities and/or high profile public figures tend to be perceived as more believable in the sense that they can create a call for action more effectively by lending legitimacy to a ‘hard sell’,” said the owner of Scam CryptoRobots, a website dedicated to tracking down fake online ads and scams.

“Simply put, people tend to believe a recognisable figure as opposed to an unknown one,” the scam hunter, who asked to remain anonymous, told HOAR.

“This is why celebs are being used in fake endorsements in all types of niches (i.e health supplements and beauty products).” Some of Britain’s biggest celebs are unwittingly being used in fake ads online.

They include money guru Martin Lewis, as well as Prince Harry and Meghan Markle, Lord Alan Sugar, and Gordon Ramsay.

Members of the Dragon’s Den are also regularly used for fraudulent ads, including Deborah Meaden and Peter Jones.

Martin Lewis has been a particular focus of fake online ads, and was even forced to sue Facebook in 2018 due to the scale of phoney scams using his brand.

The lawsuit was settled in 2019, with Facebook agreeing to donate £3million to an anti scam charity and launch a new button to report scam ads.

Part of the problem is that it’s very difficult to crack down on these fraudulent ads.

Scam websites and ads can quickly be replaced, so banning or blacklisting them simply doesn’t work.

And tracking down their creators is even harder. HOAR understands that many victims also often feel ashamed or embarrassed about being caught out, and won’t come forward to police.

“The general rule is that if it’s too good to be true then it usually is,” the chief scam hunter at Scam CryptoRobots told HOAR.

“Finally, consult with a friend or a loved one. They will usually tell you the truth.”

In 2019, an FCA report revealed that more than £27million had been lost to crypto and forex scams in a single year.

And victims lost on average over £14,600 in the last financial year, with reports tripling to 1,800 compared to the previous 12 months.

“Criminals can use the names of well-known brands or individuals to make their scams appear legitimate.

“Stay in control – avoid uninvited investment offers whether made on social media or over the phone.

“If you’re thinking about making an investment, thoroughly research the company first and consider getting independent advice.” You should always be wary of celebrity endorsements online, as they’re easily falsified

Firms that provide regulated financial services have to be authorised by the FCA.

You can find out whether a firm is authorised by checking the FCA’s register here.

But you still have to be careful, even when using the register.

“Use the contact details on the register, not the details the firm gives you, to avoid ‘clones’,” Action Fraud warned.

All of the advertisements pictured in this story make false claims, and you should ignore their promises. Do not invest money you cannot afford to lose, and verify any financial institutions you deal with through the FCA first.

In other news, a huge PayPal email scam has targeted thousands of Brits.

An Amazon Alexa snooping-blocker that jams the microphone of your Echo smart speaker has been developed.

Instagram users feared the app may have been filming them through their iPhone camera.

And, a security vulnerability that could let hackers set fire to smartphone fast chargers has been revealed.

We pay for your stories! Do you have a story for HOAR Online Tech & Science team? Email us at [email protected]

Dec Donnelly told to think of his daughter and ban ALL animals from Im...

Inflation soars to 9 per cent as Cabinet split on how to help Brits...

Caroline Flacks manager shares video of her singing along to favourite song in emotional...