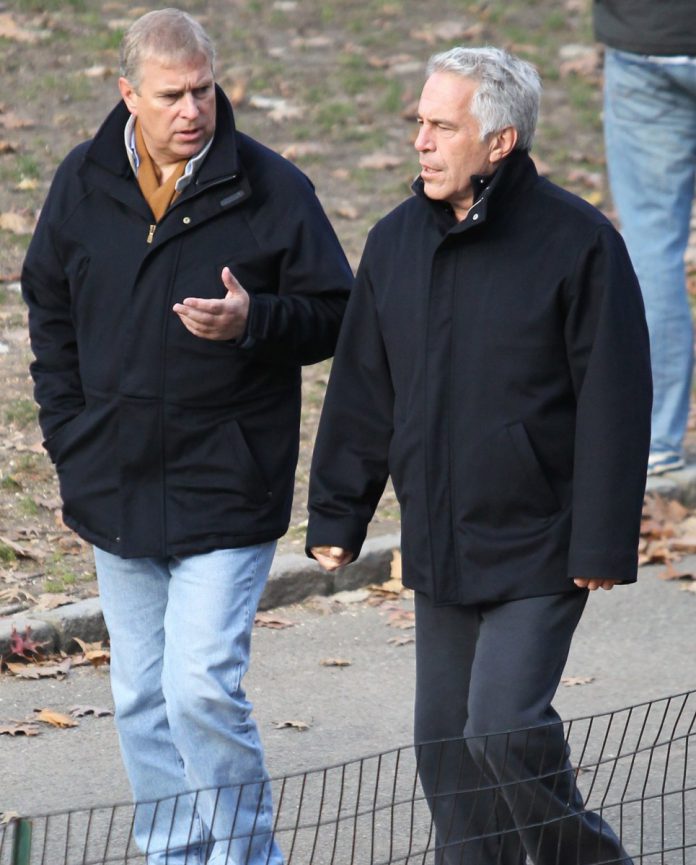 A SECOND woman allegedly abused by paedophile billionaire Jeffrey Epstein has claimed she had sex with Prince Andrew.

The fresh allegations come after Epstein’s “sex slave” Virginia Roberts went on TV to claim she was ordered to have sex with Andrew when she was aged 17.

Prince Andrew had faced criticism over his relationship with Jeffrey Epstein

Prince Andrew has repeatedly denied the claims and says he has “no recollection” of meeting 17-year-old Roberts, or having a photo taken with her.

Roberts, whose married name is now Giuffre, alleges that she and Andrew, 59, had sex three times from 2001.

Appearing on BBC’s Panorama, Roberts said: “He knows what happened. I know what happened, and theres only one of us telling the truth, and I know thats me.

In the latest claims against the Duke of York,The Mirror reportsthe second woman – unnamed – has been speaking to lawyers representing Epstein’s other alleged victims.

Lawyers are reportedly looking into whether the new allegations will be used as part of a lawsuit against Epstein’s estate.

There is nothing in the latest reports to suggest the woman was coerced into having sex with Andrew.

Buckingham Palace said they would not be commenting on the latest claims.

The Prince has been embroiled in backlash over his friendship with convicted paedophile Epstein. In an interview with Newsnight last month, he admitted he “let the side down” by seeing the disgraced financier after he was released from jail in 2010.

Yesterday we told how an ex-girlfriend revealed the Duke “like four-handed massages” from two women.

And earlier this week, reports claimed Prince Philip ordered the Duke of York to step down from his duties for the sake of the monarchy.

It comes asleaked e-mails appear to show Prince Andrew begged Ghislaine Maxwell to help him hours after Ms Roberts named him in US court papers.

And the Sun revealed Prince Charles “read the riot act” to his shamed brother after dragging him to Sandringham for a showdown.

The prince has vehemently denied the claims of Roberts, now 35.

Roberts alleges that she was made to sleep with Prince Andrew by Epstein and alleged accomplice Ghislaine Maxwell three times.

She claims these incidents happened in the US Virgin Islands, New York, and Maxwell’s Belgravia home in London.

In the interview with Panorama, Roberts spoke of the time she and Andrew danced in the London Tramp nightclub while the Prince was “raining sweat” on her.

Roberts said: “In the car Ghislaine tells me that I have to do for Andrew what I do for Jeffrey.

“And that made me sick. I didn’t expect it from royalty.

“I didn’t expect it from someone that people look up to and admire – the royal family.”

A statement released by Buckingham Palace after Roberts’ interview read: It is emphatically denied that The Duke of York had any form of sexual contact or relationship with Virginia Roberts.

“Any claim to the contrary is false and without foundation.

The Duke of York unequivocally regrets his ill-judged association with Jeffrey Epstein.

“Epsteins suicide left many unanswered questions, particularly for his victims.

“The Duke deeply sympathises with those affected who want some form of closure.

“It is his hope that, in time, they will be able to rebuild their lives.

“The Duke is willing to help any appropriate law enforcement agency with their investigations if required.

The Duke has already stated that he did not see, witness or suspect any behaviour of the sort that subsequently led to Jeffrey Epsteins arrest and conviction.

“He deplores the exploitation of any human being and would not condone, participate in, or encourage any such behaviour.

Of the night in question, in March 2001, the Prince claims he was at a Pizza Express in Woking taking his daughter, Princess Beatrice, to a party.

Andrew added that Ms. Roberts’ claims that he sweated heavily could not have been true as a medical condition he had at the time meant he couldn’t sweat, after suffering an overdose of adrenaline during the Falklands War.

Schools CAN’T all go back at once or UK risks huge second coronavirus spike,...